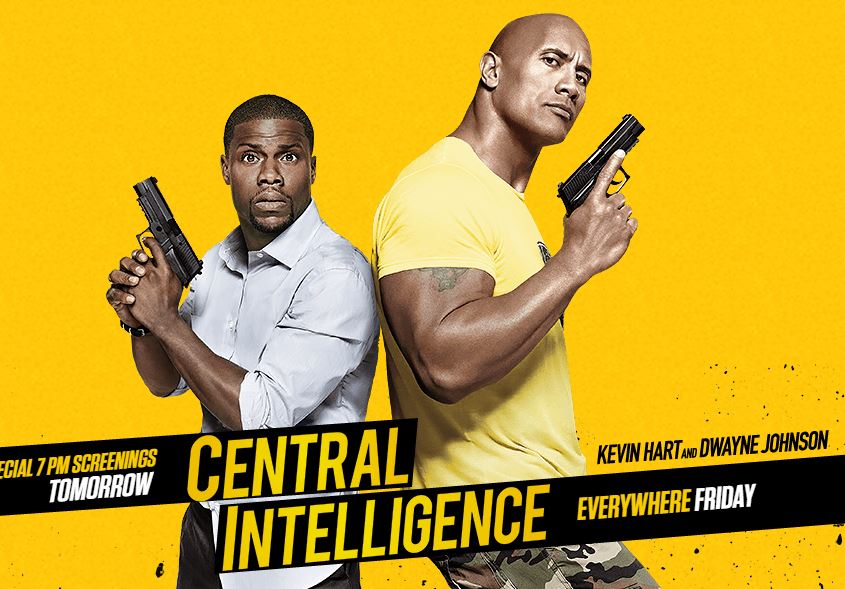 Central Intelligence Review: Action Comedy of The Year: Mark my words. Nearly every moviegoing teen will see Kevin and Dwayne “The Rock” Johnson this summer.

Central Intelligence Review: The Action-Comedy of The Year

Somebody tell Lethal Weapon‘s Mel Gibson and Danny Glover, and Rush Hour‘s Jackie Chan and Chris Tucker to make room for Central Intelligence‘s Dwayne “The Rock” Johnson and Kevin Hart as one of the most entertaining action-comedy duos of all-time.  Don’t take my word for it. Anyone without headphones on in the jam-packed theater could hear the roaring laughter from moviegoers young and old. Bob Stone (Johnson) and Calvin Joyner (Hart) are movie gold.

1. A Movie with Heart (Central Intelligence Review)
Dwayne “The Rock” Johnson’s Bob Stone didn’t always look like this. In 1996, Robbie Weirdicht was obese and physically and emotionally bullied in high school. After graduation, he worked out everyday for 6 hrs a day for the last 20 years – dropped 200lbs, joined the CIA, became one of the most lethal men on the planet and changed his name to Bob Stone. He unofficially recruits Calvin Joyner (Kevin Hart), the popular all-star athlete in school that gave Robbie a hand during his most embarrassing high school moment, to help him catch some bad guys. The film has a few cool messages that have to do with the effects of bullying, trusting your friends, and living up to other people’s expectations. Both lead actors do a great job of going from funny to sentimental, which gives the film an even broader appeal.

2. 90’s Nostalgia (Central Intelligence Review)
Audiences tend to be suckers for weddings and high school reunions. This time we have the latter, and we also have the flashback intro scene with the hair, the wardrobe, and the music. As seen in the trailer, En Vogue’s “Never Gonna Get It” instantly takes us back to that time, and we not only get bits and pieces of nostalgia here and there, we also get some great Sixteen Candles references.

When a new character is introduced in an action comedy, we hope we get a Will Ferrell or a Zach Galifinakis, but we know we usually aren’t so lucky. While we don’t see either in this film, you can expect 3-4 very familiar faces. What’s also cool is the unpredictability of the casting as well. You’ll know what we mean at the end.

In Midnight Run fashion, a lot of the movie has to do with our duo escaping the clutches of bad guys and even the authorities at times. While we applaud the creative and unexpected ways the guys get out of “sticky situations,” they’re a little too good to be true, and are as cartoony as they come.

The Rock and Kevin Hart together have the “It” factor. That one unquantifiable quality that can be imitated, but never duplicated. The litmus test is comparing their scenes without their counterpart to their scenes together. One is a C and the other is an A+. While you would expect Kevin Hart to carry the comedic weight, The Rock will deliver many more laughs, and has convinced us that he can out-Nutty Professor Eddie Murphy in a future flick.

Central Intelligence is in theaters this Friday, June 17 “everywhere.” According to this, you can catch early showings Thursday evening. If there was ever a fun summer movie for teens, or a fun summer date night movie, this is it. An absolute no-brainer for anyone looking for a fun trip to the movies. Just make sure you’re not one of those people who measures movies by whether they’re “unrealistic.”