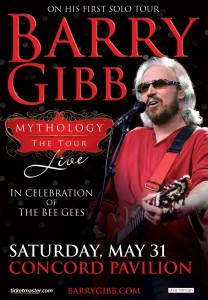 The Concord Pavilion will be on their foot moving on Saturday night when legendary Grammy® Award winner, Barry Gibb makes a rare Bay Area Tour stop at the Concord Pavilion on May 31st as part of his Mythology: The Tour Live. Tickets are on sale now through the Live Nation mobile app and at www.livenation.com.

As the co-founder and creative leader of “The Brothers Gibb,” better known to the world as The Bee Gees, Barry Gibb along with his brothers Maurice and Robin, represents one of the most successful vocal groups in rock and roll history, having sold more than 200 million albums worldwide. With their signature vocal style and blending of musical influences, the music of the Bee Gees has crossed all musical genres from Pop and R&B to Country and Rock & Roll, and became the face of a new genre of music when they ushered in the age of Disco with their contributions to 1977′s mega-hit soundtrack for “Saturday Night Fever.” They are the only group in history to have write, produce and record six straight No. 1 hits and have garnered 16 Grammy Award nominations and nine Grammy wins.

Kendra Wilkinson says Vernon Davis is “Hot” & Would Use Her “Hall Pass” With Stephen Curry! – Bay Area HQ’s Kirsten Moran caught up with…