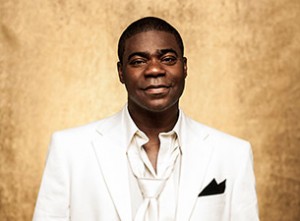 Tracy Morgan, comedian and actor, is bringing his “Turn It Funny” tour to San Francisco this Thursday. Tickets are still on sale at Ticketmaster.com.

Starring for seven seasons on NBC’s Emmy and Golden Globe Award-winning “30 Rock,” Morgan appeared opposite Tina Fey and Alec Baldwin as “Tracy Jordan,” the unpredictable star of Lemon’s (Fey) hit variety show, “TGS with Tracy Jordan.” In 2009 Morgan received his first Emmy Nomination for this role, in the Supporting Actor category; he has in six past years also been nominated for a Supporting Actor NAACP Image Award.

Morgan will continue to focus on stand up with tours throughout the globe. In 2014, Tracy returns to television for his lead role in the FX Studios comedy, Death Pact, where Morgan will play a “formerly lazy, pot-dealing assistant high school coach” who returns to his hometown as a decorated war hero. Also in April 2014, Tracy will release his first Comedy Central standup special, titled Tracy Morgan: Bona Fide.

In case you missed Nick Swardson at The Masonic in San Francisco this last November, don’t fret: The comedian/actor/writer/producer extraordinaire is already coming back…