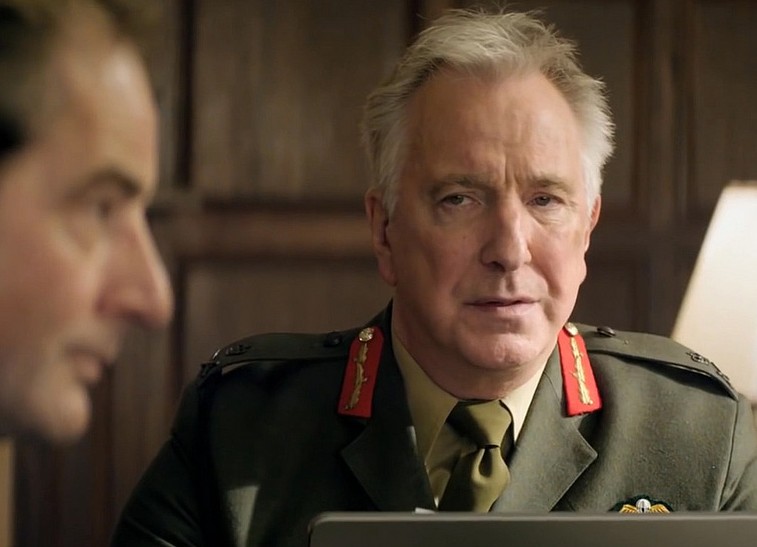 Eye in the Sky Review

While Academy Award-winning director Gavin Hood’s captivating new drone warfare thriller Eye in the Sky  features on point performances from every member of its ensemble cast, it is the late Alan Rickman’s poker-faced, yet entertaining portrayal of Lt. Gen. Frank Benson that drew laughs, applause, and cheers from the audience at last night’s showing at the Cinequest Film Festival in San Jose. Rickman (Harry Potter, Die Hard) took a handful of pages of script, and gave the acting world a primer on how to do more with less, with the perfect combination of his uber-precise delivery of key lines and signature ice-cold visage. The actor, who passed away less than two months ago, was handpicked by Hood for the role, joining other accomplished thespians on the film: Dame Helen Mirren (The Queen, Trumbo)  , Iain Glen (Game of Thrones, Downton Abbey), Barkhad Abdi (Captain Phillips), and Aaron Paul (Breaking Bad).

Colonel Katherine Powell (Mirren) is in charge of a top-secret mission: to capture, not kill, a terrorist she has been tracking for nearly a decade. The target arrives in a dangerous and densely populated Nairobi neighborhood, which makes a capture impossible. When an imminent threat of a suicide bombing comes into play, the proper action undoubtedly seems to be a drone strike. Not so fast. When collateral damage is an extremely likely by-product of a hellfire missile, issues like chain-of-command, foreign relations between allies, media fallout, and many more come into play. The comparisons to Stanley Kubrick’s Dr. Strangelove are appropriate. The real action in this movie is watching the politicians waffle, punt, and spin their way into their self-preservation and agendas. While initially it may seem that the victims here are those innocents whose lives are threatened by war, we learn to also empathize with those young drone pilots who have to live with the moral decisions made by politicians and commanders.

“Eye on the Sky” will unequivocally keep audiences on the edge of their seat. But this isn’t just a thriller. It is a stark and intricate look at how war in the 21st century is waged. As a result of Mirren and Rickman’s performances, we see what baggage leaders bring into these split-second moral decisions, and as a result of Aaron Paul’s performance, we see what baggage young drone pilots and soldiers will walk away with. And we, the audience, walk away with the feeling that the world is more gray now than it ever was.

Get to know the hottest Puerto Rican Reggaeton musician, songwriter and record producer – Yandel, formerly of Wisin Y Yandel, as he talks about…