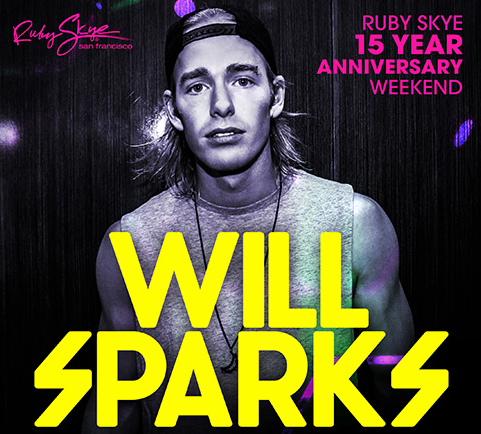 Limited Tickets are available to see Will Sparks and Lost Kings spin at Ruby Skye for the venue’s 15th Anniversary Weekend on Saturday, May 9th. Alexx Adam and Philip Adrian will also get the crowd pumped, but many will look forward to seeing the young and energetic Will Sparks  onstage to send the crowd into a frenzy.

At 21 years young, Will Sparks has cemented his position as the undisputed KING of the globally loved Melbourne sound. Countless original productions have spent weeks inside the Beatport top 10 in addition to signature remixes of global hits such as Robin Thicke’s ‘Blurred Lines’ and The Chainsmokers’ ‘Selfie’.

In his home country he was voted ‘Breakthrough Artist Of The Year’ only to be named the #1 DJ in Australia just 12 months later. Now expanding his horizons, Will Sparks is spreading like wildfire with recent festival appearances at Tomorrowland and TomorrowWorld as well as the announcement of a 50-date bus tour of North America.

Since his genre-defining track, ‘Ah Yeah!’ hit #3 on the Beatport overall charts at the tail end of 2012, Will Sparks has become unstoppable, hit after hit. Producing original tracks like ‘Catch’, ‘When The Lights Go Out’ and ‘This Is What The Bounce Is’ he garnered the attention of global heavyweight dance label Ultra Records. In the past 2 years alone, he has seen more achievements than most artists see in an entire lifetime.

Will Sparks has been named one of Billboard Magazine’s most exciting young talents as well as landing himself a residency at XS Las Vegas, a gig at Jay-Z’s ‘Made In America’ festival, a headlining spot at Paradise Ibiza as well as a set at the world’s biggest Electronic Dance Music festival, Tomorrowland.

His SoundCloud page is testament to his phenomenal influence as a producer, racking up millions of plays on a single release alone. With a debut album in the making including collaborations with some of the biggest names in dance music, this superstar is showing no signs of slowing down any time soon.

Robert Gainley and Dr. No, knew of each other for a while but had never really talked about working together. It took a good amount of whiskey before they decided they wanted to see what would happen if they collaborated on a remix. The following week they sat down, put in some work, and were amazed by the results. Truly impressed by what they just created, they decided to join forces, because what’s better than one handsome man who’s prone to fast and saucy behavior? Two handsome men that are prone to fast and saucy behavior. This duo has gained a lot of steam in a short amount of time and have already been supported by some of the bigger players in the game.

This is only the beginning of what should be an exciting path for this duo. These two young men are often compared to Karl Malone and Jon Stockton, they always deliver and they like to wear high shorts.

Watch Madison Simoes as she catches up with the Stars of “Epic Ink” at Wizard World Media Night on September 3rd, 2015 at AFK…