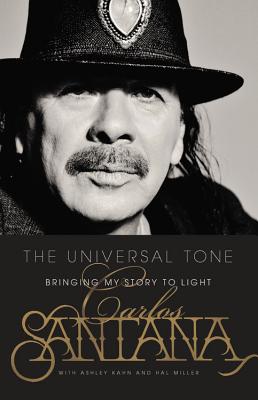 An iconic internationally-renowned musician with a San Francisco upbringing, Carlos Santana will now be sharing stories in literary form through his new autobiography The Universal Tone: Bringing My Story to Light. Santana chronicles the rich history of his namesake fusion rock band, from their big break at Woodstock 1969 to attracting a new generation of fans at the turn of the millennium with the critically-acclaimed release Supernatural. But The Universal Tone is more than just a rock-n-roll tale—it’s Santana’s personal memoirs where he recounts his childhood in Mexico, coming of age in San Francisco, and realizes life lessons, influences, and spirituality in his continuing life journey.

To support the release of the book, Santana has embarked on a book tour and today and tomorrow, he’s coming back to where it all began. Santana has two Bay Area book tour stops: The first will be held today (Wednesday), December 3rd, at the Castro Theater in San Francisco at 7:30PM. Mr. Santana will be joined by rock journalist Ben Fong-Torres in conversation for this event. The other book talk will take place on Thursday, December 4th, at Dominican University in San Rafael at 8PM. Joining Santana in conversation for this evening is Cheryl Jennings of the Bay Area’s ABC7. Both events’ admission prices include seating and a signed copy of The Universal Tone. Click for information and tickets to the San Francisco event and San Rafael event.

For more news on other celebrity events in the Bay Area, keep your tabs open on Bay Area HQ!