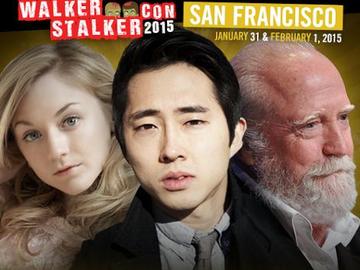 Fans of the hit AMC show The Walking Dead and other horror TV shows and films won’t want to miss the Walker Stalker Convention when it infests Fort Mason Center in San Francisco on January 31 and February 1, 2015. It will be a weekend to die for with celebrity panels and Q&A’s, autograph signings, photo opportunities, interactive activities, vendors, and exhibitors. An impressive slate of stars from earlier seasons of The Walking Dead as well as the current season will be making appearances. Some of the confirmed guests include David Morrissey (The Governor), Jon Bernthal (Shane), Steven Yeun (Glenn), Scott Wilson (Hershel), Emily Kinney (Beth), Chandler Riggs (Carl), and Sarah Wayne Callies (Lori). Other confirmed celebrity guests include Robert Englund AKA Freddy Krueger from Nightmare on Elm Street and Manu Bennett from the CW series Arrow.

You definitely don’t want to miss this incredible opportunity to see some stars from one of cable television’s hottest and most-watched shows. You can purchase your tickets for one or both days now, including VIP packages. The tiers of VIP packages include photo opps, autograph signings, front-of-the-line passes to signings and panels, premium reserved seating at panels, t-shirts, posters, and other perks and goodies. To find out more and for the complete list of celebrity guests and schedule, visit the Walker Stalker Convention San Francisco website.

Dickens Fair : Bring the Family to Visit Christmas Past