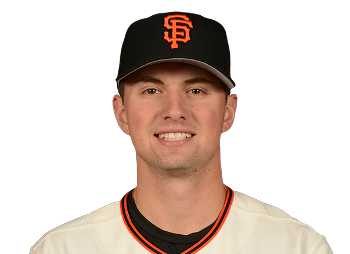 Meet Joe Panik on August 29th at Classic Materials Sports & Collectibles. San Francisco Giants fans will get a chance to meet the Giants’ second baseman and 2014 World Series champion when he visits Classic Materials in Tanforan Mall in San Bruno on Saturday 8/29 from 6pm-7pm. Tickets are now available for pre-order instore or by phone. Visit the Classic Materials Facebook Page or call

650-589-2990 for the latest complete details on the big event, including autograph ticket prices and more information.

As many Bay Area sports fans recall, Panik hit a two-run home run in Game 5 of the NLCS to help lead the Giants to an eventual 6–3 victory over the Cardinals to advance to the 2014 World Series against the Royals. In Game 7 of the World Series, the Giants beat the Kansas City Royals 3–2 to win the series. In the bottom of the third inning with a runner on first, Panik made a diving stop on a ball up the middle and flipped the ball with his glove to shortstop Brandon Crawford to get the lead runner out. Crawford then threw to first to try and get a sliding Eric Hosmer out. Initially, Hosmer was called safe on the play but after a three minute replay review, the call was overturned for the 4–6–3 double play. It was the first ever overturned call in the World Series since the replay review system was implemented, and the double play was regarded by multiple sportswriters as one of the most spectacular plays in World Series history.

Recently, Joe Panik had been experiencing back problems, but his MRI didn’t turn up anything out of the ordinary, so fans can be a bit more optimistic about his return to the lineup.

British comedian Eddie Izzard is coming to San Francisco as part of his Force Majeure world tour. The Emmy Award-winning performer (For his comedy…