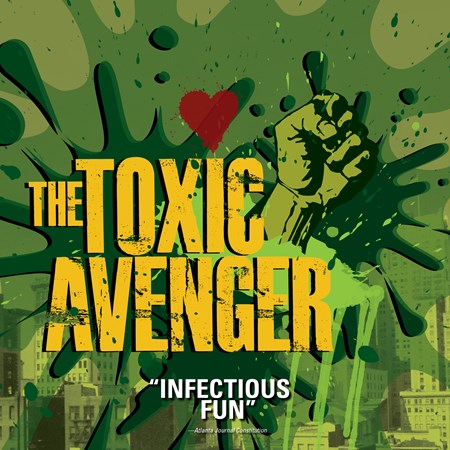 The Toxic Avenger Reeks Of Fun –

The Toxic Avenger San Jose – In a world mired by political turmoil and environmental plight, the San Jose Stage Company’s production of The Toxic Avenger is a pungent breath of fresh air. (Tickets still available here.)

With clever direction from director Jonathan Rhys Williams that mixes live performance from a talented ensemble with multimedia sight gags, this musical comedy based on the cult superhero franchise of the same name makes us laugh at some truly disgusting themes including pollution, violence, political corruption, and New Jersey– its favorite punching bag and easiest target.

Courtney Hatcher plays Sarah, the blind librarian beauty to Will Springhorn Jr’s beastly Toxie, your typical environmentalist geek turned killer mutant. Their romance is at the epicenter of the plot, turning the would-be superhero into a misunderstood Frankenstein creature who helps people when he’s not busy murdering them.

Allison F. Rich delivers a standout performance in a dual role as Toxie’s overbearing mother and the scandalous Mayor Babs Belgoody. She brought down the house with the song “Bitch/Slut/Liar/Whore” where both her characters share the stage and battle one another through song, dance, and insult. (How? You’ll see.)

The rest of the fictional city of Tromaville, NJ, is played by the two-person ensemble of Joshua Marx and Branden Noel Thomas donning various costumes, wigs, and “indeterminate accents.” The sheer pace at which they change from one character to the next is laudable, but the palatable fun and playful passion that they bring to each of their characters is essential for keeping the production afloat.

The set design is a living character in its own right. At the center is a video background which often punctuates the stage’s action with gratuitous blood splatters and video game-style health bars accompanying the fights, a la Scott Pilgrim vs the World.

The rest of the fixed set is primarily comprised of colorful barrels of toxic sludge, reminiscent of retro-style cartoons replete with a surprise cameo from Blinky, the iconic three-eyed fish from “The Simpsons”. Perhaps a sly allusion to the franchise’s animated series “Toxic Crusaders”, or perhaps just a faithful recreation of New Jersey’s natural landscape.

It’s often challenging to keep up with the musical’s rapid-fire irreverent comedy. Often you may find yourself wondering what jokes you’re missing while you’re busy laughing from the previous one. While the frantic pace is largely a result of the actors’ impressive ability to generate energy, the biggest flaw in this production is that the sustained breakneck speed never allows the play to hit its crescendo. Important plot points often feel rushed and the climax seemingly comes out of nowhere.

The comedy itself is largely self-referential. Generally these jokes work, such as one character’s tongue-in-cheek reference to seeing “a musical based on a movie most people saw when they were stoned.” A few, such as the characters’ envy of “the beautiful people of Manhattan” lose context in the regional production and come across as confused. But the jokes come so quickly it’s easy to forgive the few that fall flat.

It’s worth noting that this seems to be one of those rare musical comedies where the women get to have more fun than the men. While Springhorn Jr brings surprising depth of integrity to his portrayal of the tortured Toxie, the strongest moments are reserved for Hatcher’s Sarah and Rich’s Mayor Babs Belgoody/Ma Ferd dual role. The way the play is written, one could even argue that Sarah’s foil to the villainous Belgoody makes her the true protagonist of the play.

But critique like that is better reserved for productions that take themselves more seriously. This is a musical where the characters play baseball with human organs and a blind woman is convinced her mutant boyfriend is just French.

The moral is simple– make the world a better place by killing polluters. And if New Jersey can be saved, maybe the rest of the world has a fighting chance after all.