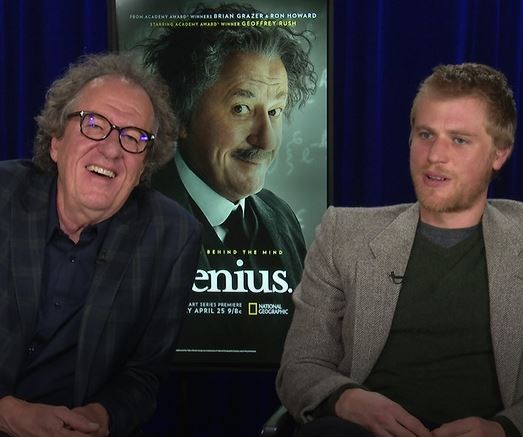 Watch Academy Award winner Geoffrey Rush and  actor/musician Johnny Flynn, who both play Albert Einstein in NatGeo’s new series Genius, talk to Bay Area HQ about the Einstein you never knew about and how they teamed up to get it right for audiences. See what Geoffrey Rush says about his Pirates of the Caribbean: Dead Men Tell No Tales co-star Johnny Depp, when comparing him to the the legendary Einstein.

From Fox 21 Television Studios, whose recent “The People v. O.J. Simpson: American Crime Story” dominated every awards contest and critics’ list; Imagine Television, the producer of “24” and “Friday Night Lights”; and OddLot Entertainment, which earlier this year produced the Academy Award®– nominated film “Hell or High Water,” the series is based on Walter Isaacson’s book “Einstein: His Life and Universe” and is executive produced by Brian Grazer, Ron Howard and Gigi Pritzker, with Howard making his scripted television directorial debut with the first episode.

Featuring Einstein’s lovers, enemies and fellow scientific luminaries, the all-star cast includes Geoffrey Rush (“The Kings Speech,” “Pirates of the Caribbean,” “Shine”) as the celebrated titular scientist, Johnny Flynn (“Clouds of Sils Maria,” “Song One,” “Lovesick”) as Albert in the years before he rose to international acclaim and Emily Watson (“Theory of Everything,” “The Book Thief”) as his second wife — and first cousin — Elsa Einstein.

GENIUS tracks Einstein’s rise from humble origins as an imaginative, rebellious thinker, through his struggles to be recognized by the establishment, to his global celebrity status as the man who unlocked the mysteries of the cosmos with his theory of relativity. Delving deeper, the series follows Einstein’s alternately exhilarating emotions and heartlessness in dealing with his closest personal relationships, including his children, his two wives and the various women with whom he cheats on them.

The series is set against an era of global unrest over the course of two world wars. Faced with rising anti-Semitism in Europe, surveillance by spies and the potential for atomic annihilation, Einstein struggles as a husband and a father, not to mention as a man of principle, even as his own life is put in danger.

“I have no special talents, I am only passionately curious.”

The series begins in Einstein’s (Flynn) teenage years, when he opposes his father and drops out of school in Germany to go to university in Switzerland. His love of women and passion for theoretical physics blossom after he breaks the heart of his first love, Marie Winteler (Shannon Tarbet, “A Promise,” “Virtuoso”), to pursue his mysterious and elusive fellow physics student Mileva Maric (Samantha Colley, “Victoria,” “The Crucible”). Their whirlwind romance puts them at odds with teachers and leads to an unexpected pregnancy, forcing both to set aside grand dreams and Einstein to take a mundane job as a patent clerk at the urging of his close friend Michele Besso (Seth Gabel, “Salem,” “Fringe”). Striving in earnest to break into the scientific establishment, Einstein publishes five original papers in one year, catching the eye of many, including the scientist who will go on to become his fiercest adversary, Dr. Philipp Lenard (Michael McElhatton, “Game of Thrones”).

As World War I looms and his marriage begins to crumble, Einstein throws himself into an affair with his first cousin Elsa. Shifting global politics draw him into increasingly politicized scientific circles, causing friction with friends and fellow scientists like Fritz Haber (Richard Topol, “Covert Affairs,” “Elementary”) and Max Planck (Ralph Brown, “Alien 3,” “TURN: Washington’s Spies”). Taking a moral stand, Einstein refuses to support Germany’s war effort. When war descends and borders are shut down, he is prevented from going to his sons in Switzerland when they need him most.

“I never think of the future. It comes soon enough.”

Einstein’s (Rush) fortunes rise after the war when relativity is proved right. On the verge of becoming an overnight celebrity, Elsa (Watson) demands he marry her to avoid the scandal such scrutiny will bring. Fighting with Mileva for a divorce, Einstein also has to contend with the roller coaster of fame. After a tense interview with consulate official Raymond Geist (Vincent Kartheiser, “Mad Men,” “Saints & Strangers”), he eventually escapes a rising tide of anti-Semitism and seeks sanctuary in the United States as an immigrant.

Living and teaching in Princeton, New Jersey, Einstein continues to be besieged on all sides. His fractious relationship with his children and grandchildren weighs on him, he ends up in bed with Russian spy Margarita Konenkova (Ania Bukstein, “Game of Thrones”) and he must cope with J. Edgar Hoover’s (T.R. Knight, “Grey’s Anatomy”) personal vendetta to bring him down. He also faces possibly his biggest challenge ever: the pressure to set aside his lifelong pacifism in the hopes of stopping Hitler’s conquest of Europe. While his journey is far from easy, Einstein still manages to find hope and inspiration before his death, in the form of a young girl learning to understand the world. As Einstein famously said, “The important thing is not to stop questioning. Curiosity has its own reason for existing.”

Filmed in Prague, Czech Republic, where Einstein lived and taught early in his career, the series also features a raft of scientific superstars from the turn of the 20th century, including Marie and Pierre Curie, Wilhelm Rontgen, Carl Jung, Werner Heisenberg and more. GENIUS premieres globally in April on National Geographic in 171 countries and 45 languages.