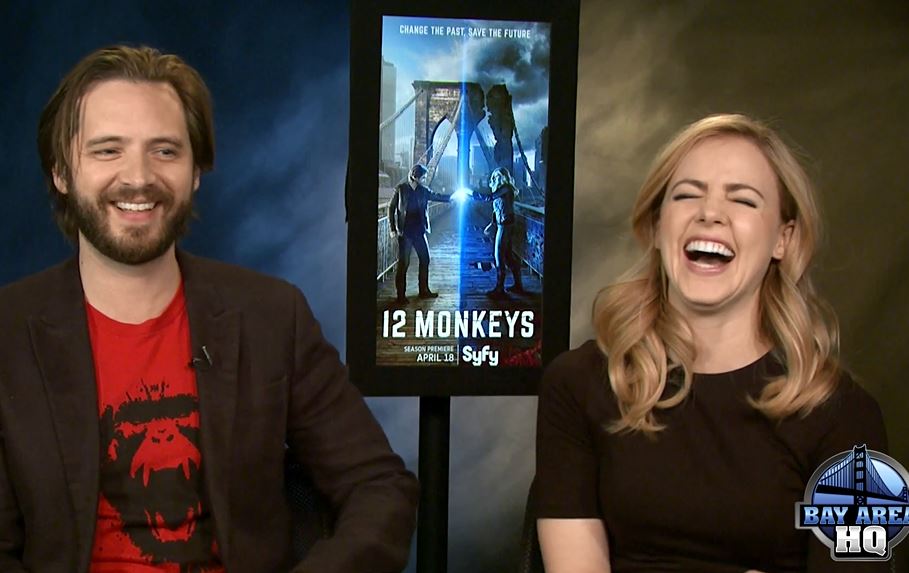 Watch our fun chat with Aaron and Amanda, where we play the “Monkey-Wed” game, which is like the “Newlywed Game,” but a bit different. We also talk about Cole being in “the friend zone,” Amanda’s love for the San Francisco Bay Area, Bloopers, and more!

12 MONKEYS follows the journey of James Cole (Aaron Stanford), a man from 2043 sent back in time to stop a malevolent organization known as the Army of the 12 Monkeys from destroying the world.  Joining forces with Dr. Cassandra Railly (Amanda Schull) here in the present day, Cole must untangle an insidious conspiracy that’s been spun throughout centuries.  As Cole, Dr. Railly and their unlikely allies get closer to discovering the truth, they will learn that there are not only deadly consequences for mankind…  but time itself.
Season 2 will feature acclaimed guest stars including:

12 MONKEYS is produced by Universal Cable Productions in association with Atlas Entertainment, who produced the original Golden Globe-winning theatrical film.‎

Matalas and Fickett serve as the showrunners and are executive producers along with Charles Roven (“Suicide Squad,” “American Hustle,” “Man of Steel,” “The Dark Knight Trilogy”) and Richard Suckle (“Suicide Squad,” “American Hustle,” “The International”). Atlas Entertainment and Roven produced the “Twelve Monkeys” film, which starred Bruce Willis, Brad Pitt and Madeleine Stowe, on which the series is based.