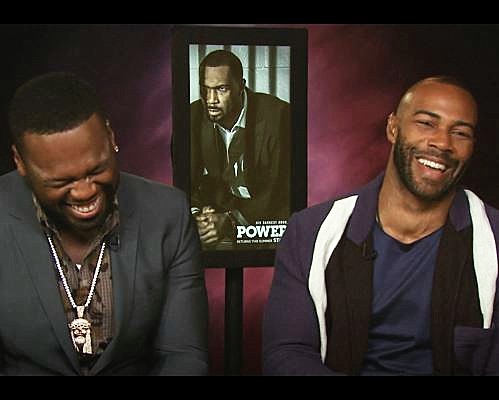 Omari Hardwick and 50 Cent talk to Bay Area HQ about the new fourth season of POWER on STARZ. Watch our all new interview as we ask Omari Hardwick and 50 Cent if the 2017 Golden State Warriors could beat the 1996 Chicago Bulls. We also ask how long the outspoken LaVar Ball would last if he played himself on POWER. Watch the video above to see 50 Cent talk about his comment on @romangoddess1‘s instagram post.

Starz announced the highly-anticipated Season Four return of the  #1 hit STARZ Original series “Power” on Sunday, June 25, starting at 12:01 am on the STARZ app and On Demand. The network on-air premiere will be at its regularly scheduled time of 9:00 pm ET/PT. Season Four of “Power” will consist of 10 one-hour episodes.

A full weekend “Power” Play marathon begins on Saturday, June 24th at 5PM ET/PT when the network airs Seasons One through Three.

The third season of “Power” was the most-watched ever for a STARZ Original series, with a record 8 million multiplatform viewers per episode.* Season Three of “Power” was the second-highest rated series on all of premium pay television in 2016.**

Season Four of the Courtney A. Kemp created series, picks up on the heels of James “Ghost” St. Patrick’s highly publicized arrest by his ex-girlfriend, Assistant U.S. Attorney Angela Valdes, for the murder of FBI Agent Greg Knox—a crime he did not commit. Ghost can’t outrun his past choices and mounting enemies this season, which threaten his freedom and his family’s safety at every turn. His fight for redemption brings him face-to-face with the Feds, the media, new allies, and old foes. But the biggest obstacle for Ghost remains himself and his internal struggle between the man he wants to be and the one he really is.

“Power” is a visionary drama that straddles the glamorous Manhattan lifestyles of the rich and infamous and the underworld of the international drug trade. The cast is led by Omari Hardwick as drug kingpin and nightclub impresario James “Ghost” St. Patrick, Joseph Sikora, as his brother in arms in the drug business, Tommy Egan; Naturi Naughton plays Ghost’ fierce, loyal wife Tasha St. Patrick and Lela Loren as his first love, Assistant U.S. Attorney, Angela Valdes.

“Power: The Complete Season Three” arrives on Blu-ray and DVD on June 13th from Lionsgate. The Blu-ray and DVD will include special features including a recap of the season and an inside look at the making of the show and be sold for $59.99 and $49.98, respectively.

The show is also produced by G-Unit Films and Television, the production company launched by Curtis “50 Cent” Jackson.

Starz (www.starz.com), a Lionsgate company (NYSE: LGF.A, LGF.B), is a leading global media and entertainment company that provides premium subscription video programming on domestic U.S. pay television networks and produces and distributes content for worldwide audiences, including its investment in the STARZ PLAY Arabia OTT service.  Starz is home to the flagship STARZ® brand with 24.3 million subscribers in the United States as of December 31, 2016, with the STARZ ENCORESM network at 31 million subscribers. Starz provides high-quality, entertaining premium subscription video programming with 17 premium pay TV channels and associated on-demand and online services, including the STARZ app. Sold through U.S. multichannel video distributors, including cable operators, satellite television providers, telecommunications companies, and other online and digital platforms, Starz offers subscribers more than 5,000 distinct premium television episodes and feature films every year and up to 1,500 every month, including STARZ Original series, first-run movies and other popular movie and television programming.