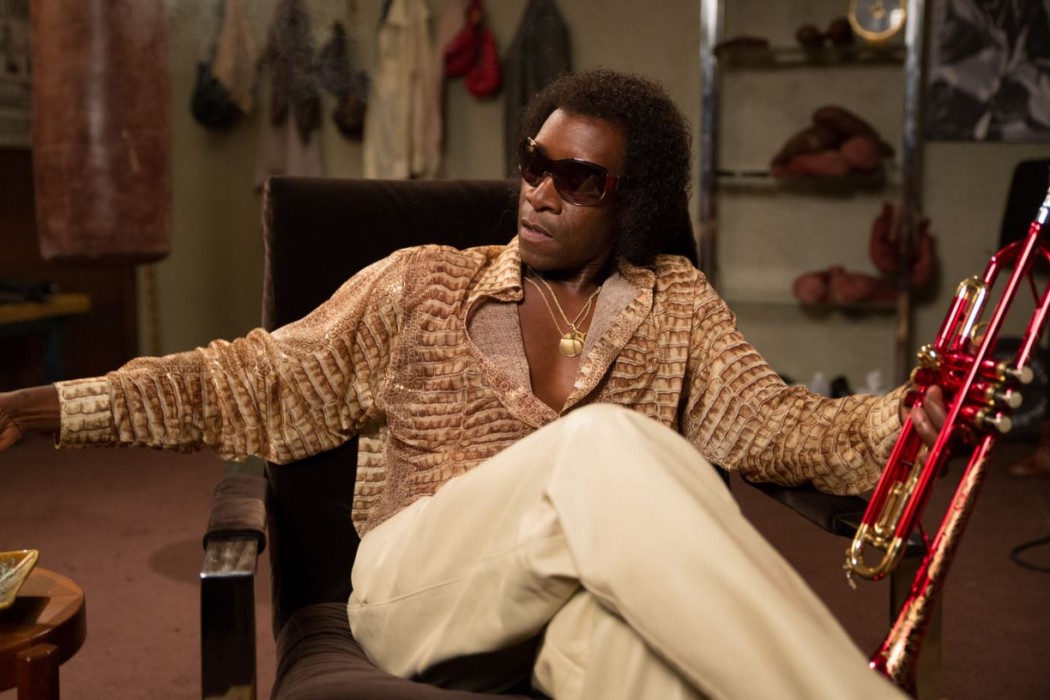 Don Cheadle co-wrote, directed and transformed into Miles Davis for “Miles Ahead.”

It’s hard to find a motion picture about a legendary artist that is more true to its subject than “Miles Ahead.” Make no mistake, Cheadle doesn’t glorify or excuse the indiscretions and abusive history of one of his idols, but he does give viewers insight into the complexity of the man who introduced the world to so many forms of music. “Miles Ahead” doesn’t follow an “A to B” chronological path through the life of the musician. You won’t find any scenes of Davis as a youth.

Instead, “Miles Ahead” gives us a glimpse into the different sides of the iconic jazz musician, trumpeter, bandleader, and composer. There’s the loving Miles. The womanizing Miles. The Miles who can see a dimension to music that no one else can. The Miles who will punch a guy out just for messing with him. The tragic figure who is troubled by chronic hip pain, depression, and dependence on drugs and alcohol. But the one constant is unequivocally the music. It’s as if Cheadle directed this movie with headphones on, with the vast and diverse library of Davis’ works playing throughout the 100-minute film.  And Cheadle, as an actor, looks and sounds just like Miles Davis. Not surprising, given the combination Cheadle’s acting chops and love for the artist.

“Miles Ahead,” inspired by events in his life, is an impressionistic, no-holds barred portrait of one of 20th century music’s creative geniuses, Miles Davis, featuring a career defining performance by Oscar nominee Don Cheadle in the title role. Working from a script he co-wrote with Steven Baigelman, Cheadle makes his bravura directorial debut. In the midst of a dazzling and prolific career at the forefront of modern jazz innovation, Miles Davis (Cheadle) virtually disappears from public view for a period of five years in the late 1970s. Alone and holed up in his home, he is beset by chronic pain from a deteriorating hip, his musical voice stifled and numbed by drugs and pain medications, his mind haunted by unsettling ghosts from the past. A wily music reporter, Dave Braden (Ewan McGregor) forces his way into Davis’ house and, over the next couple of days, the two men unwittingly embark on a wild and sometimes harrowing adventure to recover a stolen tape of the musician’s latest compositions. Davis’ mercurial behavior is fueled by memories of his failed marriage to the talented and beautiful dancer Frances Taylor (Emayatzy Corinealdi). During their romance and subsequent marriage, Frances served as Davis’ muse. It was during this period that he released several of his signature recordings including the groundbreaking “Sketches of Spain” and “Someday My Prince Will Come.” The idyll however, was short lived. The eight-year marriage was marked by infidelity and abuse, and Frances was forced to flee for her own safety as Miles’ mental and physical health deteriorated. By the late ‘70s, plagued by years of regret and loss, Davis flirts with annihilation until he once again finds salvation in his art.

Early in the film, we hear Davis talk about his own duality, admitting that he a Gemini. But that’s far off the mark, as the movie shows, during one decade or another, that he is as complex of an individual as there ever was, swinging from one extreme to another. Was it the chronic pain? Was it the drugs? Was it the curse of being such a creative genius? While you won’t find any answers in this film, you’ll walk away with something more valuable.
For newcomers, consider this an  informal, unapologetic, and undressed introduction. It will intrigue you to the point that you’ll walk away from it and find yourself discovering Miles Davis, whether Youtube-browsing or streaming online, for weeks to come.  For longtime fans, this will resonate instantly and be as satisfying as listening to one of Davis’ 10-minute solos.

Either way, “Miles Ahead” is truly unique and true to it’s subject. Cheadle set out to make the movie that way, and  if you don’t like it, well I’m sure Miles would have been just fine with that.