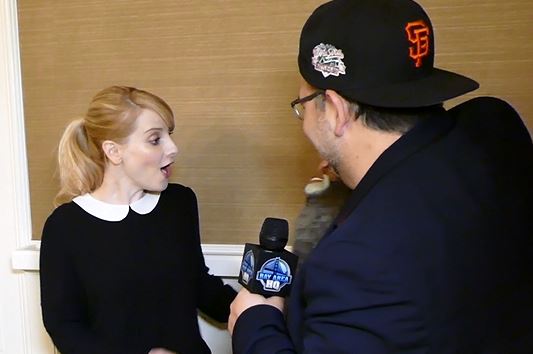 Melissa Rauch is in for a big surprise during her interview for “The Bronze.” Shot on March 6, 2016 in San Francisco.

Bay Area HQ caught up with film and TV star Melissa Rauch, and ended up with an epic interview where the actress talked about Half Moon Bay, “I Love You Man,” a hilarious “Big Bang Theory” story, and her over-the-top sex scene in her new movie, “The Bronze,” opening March 18th everywhere.

A decade ago, Hope Ann Greggory (Melissa Rauch) was America’s sweetheart. Her inspired performance on a ruptured Achilles at the world’s most prestigious gymnastics tournament clinched an unlikely bronze medal for the U.S. team and brought glory to her hometown of Amherst, Ohio. But in the years since that epic third place victory, Hope hasn’t done a whole lot with her life. Still living in her dad Stan’s (Gary Cole) basement, still sporting her daily uniform of a Team USA gym suit with teeny-bopper bangs, ponytail and scrunchie, she spends her days at the mall milking her minor celebrity for free food and favors. Hope’s routine is upended when she learns that she must coach Amherst’s newest gymnastics prodigy Maggie (Haley Lu Richardson) in order to receive a sizeable financial inheritance. The hard-edged yet insecure Hope is faced with a serious dilemma: does she jeopardize her “hometown hero” status by devotedly training this rising star to achieve the dreams she never could? Or does she attempt to sabotage the impressionable Maggie to ensure that she remains the one and only star in Amherst?

Making strides in the world of television and film, Melissa Rauch is blossoming in her roles as an actress and writer.

Rauch can currently be seen on the most-watched network comedy show THE BIG BANG THEORY as the hilarious Bernadette Rostenkowski. In 2013, Rauch was nominated for a Critics’ Choice TV Award in the category of “Best Supporting Actress in a Comedy Series” along with the nomination for “Favorite TV Gal Pals” at the People’s Choice Awards. The show was nominated in 2011, 2013, and 2014 for a Golden Globe Award, was nominated for an Emmy Award from 2011-2015, and won the Critics’ Choice Award for “Best Comedy Series” in 2013 and 2014. Rauch and the cast have also been nominated in the category of “Outstanding Performance by an Ensemble in a Comedy Series” by the Screen Actors Guild from 2012-2015, and the cast won the People’s Choice Award in the category of “Favorite Network TV Comedy” in 2010, 2013, 2014, 2015, and 2016.

In addition to THE BIG BANG THEORY, Rauch has starred in a number of television series including TRUE BLOOD, KATH & KIM, THE OFFICE, and 12 MILES OF BAD ROAD.

On the big screen, Rauch most recently co-wrote, along with her husband Winston Rauch, and starred in the comedy THE BRONZE, which opened the 2015 Sundance Film Festival. Rauch plays a bitter former gymnastics bronze medalist who must fight for her local celebrity status when a new young athlete star rises in town. VARIETY’s Ramin Setoodeh, wrote “[Rauch] delivers the best breakthrough comedic performance by an actress since Melissa McCarthy in BRIDESMAIDS.” LA TIMES’s Steven Zeitchik said, “It’s Rauch who steals the show, morphing her lovable network-TV shrillness into something more unrecognizably dark.” Sony Pictures Classics is set to release the film on March 18, 2016.

Rauch can soon be heard as the voice of Francine in the upcoming animated comedy ICE AGE: COLLISION COURSE. COLLISION COURSE is set to be released in theaters July 22, 2016 and is the fifth installment in the popular cartoon franchise. Other voices joining her include Jesse Tyler Ferguson, Ray Romano, Queen Latifah, and Jennifer Lopez.

Rauch started her career as a standup comedienne and became a fixture on the fan favorite vh1 show BEST WEEK EVER. She later starred and co-wrote her own one-woman show, THE MISS EDUCATION OF JENNA BUSH, where she played the former President George Bush’s daughter. Her sold out production garnered her a win in the category of “Outstanding Solo Show” at the New York International Fringe Festival as well as the “Theater Mania’s Audience Favorite Award” and was an official selection of HBO’s US Comedy Arts Festival.

Rauch currently resides in Los Angeles, California with her husband.

Gary Cole can currently be seen on HBO’s Emmy winning comedy “Veep” opposite Julia LouisDreyfus, and he has received an Emmy nomination for his work. He recently completed work in the Blumhouse feature “The Town that Dreaded Sundown” and appeared in the New Line feature “Tammy” opposite Melissa McCarthy, Susan Sarandon, and Allison Janney.

Best known for his film roles in classic cult comedies such as “Office Space,” “Pineapple Express,” “Talladega Nights: The Ballad of Ricky Bobby,” and “Dodgeball: A True Underdog Story,” Cole is a veteran of both the screen and the stage. As an ensemble member of Steppenwolf Theater Company, Cole’s theater credits include “August: Osage County,” “Collected Works of Billy the Kid,” “Speed the Plow,” “American Buffalo,” “Flyovers,” and “Balm in Gilead.” Additional film credits include: “American Pastime,” “The Ring 2,” “Win a Date With Tad Hamilton!,” “I Spy,” “One Hour Photo,” “A Simple Plan,” “The Brady Bunch Movie” and Clint Eastwood’s “In the Line of Fire.” Television credits include: “Midnight Caller,” “The West Wing,” “Arrested Development,” “Desperate Housewives,” “Chuck,” “The Cleaner,” “Entourage,” “The Good Wife,” “True Blood,” “Suits,” and “Hart of Dixie.”

Thomas Middleditch can currently be seen as Richard Hendrix, the central character in Mike Judge’s Emmy nominated series on HBO, “Silicon Valley.” In addition to “The Bronze,” Middleditch will be seen in the upcoming “The Final Girls,” directed by Todd Strauss-Schulson. He will also soon be heard as one of the lead voices in the DreamWorks animated feature, “Captain Underpants,” along with Ed Helms, Nick Kroll, and Kevin Hart to be directed by Rob Letterman.

Middleditch has been featured on “The Office,” playing the role of Dwight Schrute’s brother, and also played Fuzzy in the Paramount Pictures feature, “Fun Size.” Other film work includes Martin Scorcese’s “The Wolf of Wall Street,” “The Campaign,” “The Brass Teapot,” “The Kings of Summer,” “The Other Guys,” “Being Flynn,” and “Splinterheads.” He is a regular performer at UCB, a member of The Improvised Shakespeare Company, and creates and performs comedy shorts with College Humor.

Like many funny people before him, Middleditch came to the U.S. from Canada (British Columbia) but first he made a stop in Chicago and toured with The Second City before moving to New York City. He currently lives in Los Angeles with his two dogs, Meatloaf and Potter.

On the heels of wrapping “The Bronze,” Sebastian Stan has been cast in two major films helmed by iconic directors. Stan will play NASA scientist Dr. Chris Beck in Ridley Scott’s “The Martian” co-starring Matt Damon and Jessica Chastain, based on the pioneering e-book by Andy Weir. Stan was also cast as Joshua, the estranged son to Meryl Streep’s rocker mom in Jonathan Demme’s “Ricki and the Flash.” Written by Diablo Cody, the film also co-stars Kevin Kline and Rick Springfield. Stan will then reprise his role as Bucky Barnes/The Winter Soldier in his third appearance in the Captain America franchise in “Captain America: Civil War.”

Other film credits include Darren Aronofsky’s “Black Swan,” Demme’s “Rachel Getting Married,” and “Hot Tub Time Machine” with John Cusack. On television, Stan is well-known for his recurring role as Carter Baizen on the hit series “Gossip Girl.” He also starred opposite Sigourney Weaver in USA Network’s “Political Animals” and in the NBC drama “Kings” alongside Ian McShane. Stan appeared in the first season of ABC’s hit series “Once Upon a Time” as fan-favorite, “The Mad Hatter”.

In Chicago, Strong improvised regularly at iO and served as an understudy for the Second City Main Stage and E.T.C. shows. She performed as a member of the Second City national touring company and has also appeared at the Chicago SketchFest, Chicago Just for Laughs, the New York Sketch Fest and the Edinburgh Fringe Festival.

Strong can be seen in upcoming films “Staten Island Summer,” and also voices several characters in “The Awesomes,” the Hulu original series created by Seth Meyers. Strong was raised in Oak Park, Illinois, and has a BFA in theater from the California Institute of the Arts.

Haley Lu Richardson has always been one for passion and dreams, but when she moved to Los Angeles at 16 she quickly realized that the only “trick” to success is hard work. Her first test of hard work was dancing on the Microsoft X-box Kinect float in the 2012 Rose Bowl Parade. She was quick to land her first lead roles in TV movies “Christmas Twister” and “Escape from Polygamy.” Next she transformed into bleached-blonde Tess for a season of “Pretty Little Liars” spinoff “Ravenswood.” With the blonde do, Haley Lu also appeared on MTV’s “Awkward” as “queen of the sophomore sluts,” and a similar role in TBS’s up coming series “Your Family or Mine.” In 2014, Richardson travelled to national and international film festivals for her two movies “The Well” and “The Young Kieslowski.”

Tickets are now on sale for a crucial Game 7 at the Shark Tank in San Jose on Wednesday, April 30th. San Jose could not…