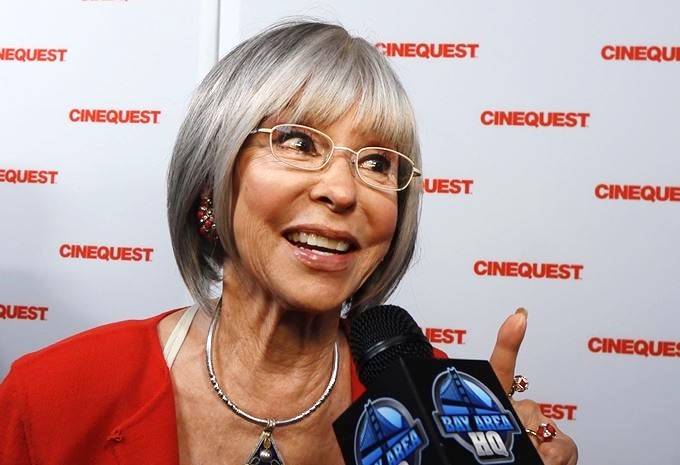 (synopsis) Two self-involved cousins have better things to do than embark on a road trip with their grandmother, Gloria (Moreno). But someone has to take the frail woman to an assisted care facility. Despite such inconvenient circumstances, the two cousins—a risk-averse yuppie and a slacker stand-up comedian—find plenty of laughs along the way. Between detours of drinking and dancing and the transformation of Gloria into her normal, vibrant self, the three family members rediscover their relationship with one another. Heartwarming and riotously funny, Remember Me is on point about the true value of family and what it means to really live. – Nina Zheng

Timeless, trailblazer, inspiration—only a few of many words that one could use to describe the iconic Rita Moreno—a vibrant artist who continues to leave indelible impressions on all of us through her life and career as an actor, a dancer, and a singer. Revered as a national treasure (a status that was officially ratified with the Presidential Medal of Freedom, presented to her by President George W. Bush in 2004), Moreno continues to inspire on stage and on screens both large and small.

Born Rosita Dolores Alverio in Humacao, Puerto Rico, Moreno and her mother moved to New York City in 1937, where she started as a child actress. Just before her 14th birthday, she made her Broadway debut, starring alongside a young Eli Wallach inSkydrift. Her first experience in film was dubbing Spanish-language versions of U.S. films, which would be followed by a few small roles in movies. However, once the world caught sight of her performance and beauty as Zelda Zanders in Singin’ in the Rain, her popularity skyrocketed.

Rita Moreno is one of a handful of artists to have achieved the “grand slam” in show business: the EGOT—an Emmy, Grammy, Oscar, and Tony. And with our presentation of the Maverick Spirit Award, that makes her the first ever to achieve MEGOT status. In 1961, her turn as Anita in Robert Wise’s classic West Side Story made her a worldwide sensation and garnered her the Academy Award for Best Supporting Actress, becoming the first Hispanic woman to win this honor.

As Hollywood tends to do, it tried to pigeonhole Moreno by offering her roles as the spitfire sexpot to which it thought Hispanic women should conform. But she was having none of that. She blazed her own path, spending her thriving career shunning those stereotypes and breaking down barriers for other Latinos in entertainment.

In 1972, Moreno won a Grammy Award for her work on The Electric Company’ssoundtrack album—the iconic role for which she also became known as the woman who delivered the show’s catchphrase “Hey, you guys!” A few years later, she won the Tony Award for The Ritz and the two Emmy Awards for The Muppet Show and The Rockford Files.

“She’s still a leading lady of her era, a trailblazer with courage to break through barriers and forge new paths.” – President Barack Obama

The Shallows Review: Blake Lively’s Booty vs. The Beast

The Shallows Review: Blake Lively’s Booty vs. The Beast – Actress not only Fits into a Bikini Swimmingly; She Delivers a Versatile & Compelling…