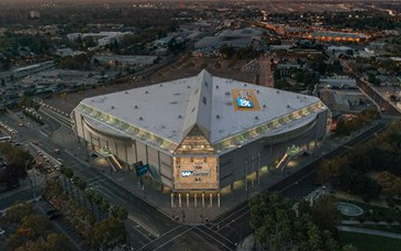 NFL Announces Primetime Super Bowl Opening Night at SAP – The NFL will kick off Super Bowl 50 festivities in the San Francisco Bay Area by hosting participating teams in primetime at Super Bowl Opening Night Fueled by Gatorade on Monday, February 1, 2016 at SAP Center in San Jose, Calif., the NFL announced today. Super Bowl Opening Night is a shift from the traditional Media Day held on Tuesday morning. This will be the first time the players and coaches address the media while in the Bay Area. The event will begin at 5:00 p.m. PT with interviews from approximately 5:15 to 6:15 p.m. PT and 7:00 to 8:00 p.m. PT. on Monday.

“We are excited to enhance an annual event and provide a unique experience for more fans in both the San Francisco Bay Area and nationwide, while continuing to provide access to the Super Bowl teams for media from around the world,” said NFL Senior Vice President of Events PETER O’REILLY. “By elevating the event to primetime, fans across the country can experience even more of the excitement of Super Bowl leading up to the game.” Fans will sit in the stands of the arena and watch thousands of media interview members of the Super Bowl teams.

Gift bags will be distributed to fans and include a radio to tune into the NFL Network coverage and listen to some of the individual player interviews from the podium microphones. In addition, there will be musical performances and player and cheerleader appearances. Super Bowl 50 will be played February 7, 2016 at Levi’s Stadium in the San Francisco Bay Area. Tickets for Super Bowl Opening Night Fueled by Gatorade will be available for purchase later this fall for less than $30 at SuperBowl.com (http://www.nfl.com/superbowl/50) . For more information and updates on the event and other Super Bowl 50 celebrations, fans may visit SuperBowl.com (http://www.nfl.com/superbowl/50) or follow @SuperBowl on Twitter.