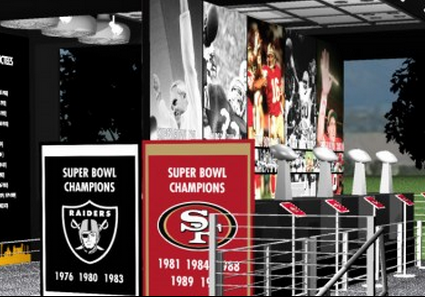 “The 50 Tour will celebrate the Bay Area’s place in Super Bowl history and give residents a chance to experience the excitement of the game’s golden anniversary,” said Host Committee CEO Keith Bruce. “We look forward to bringing the 50 Tour to communities around the Bay Area.” The 50 Tour will launch at “2015 NFL KICKOFF PRESENTED BY HYUNDAI” being held in the San Francisco Bay Area on September 9 and 10. The tour will make stops at a series of community events and festivals taking place around the region through mid-November.

The 50 Tour will feature:

Champions Row: The Bay Area has more Super Bowl wins than any other region. Eight Bay Area Super Bowl Vince Lombardi Trophies will be on display – five from the San Francisco 49ers and three from the Oakland Raiders – with photo montages capturing the championship wins. The 50 Tour will be the first time that all eight championship trophies will be displayed together.

The Chevron STEM Zone: An initiative to promote higher education in science, technology, engineering, and math, the Chevron STEM Zone will invite Tour visitors to learn more about the science of football. Together, Chevron and the 49ers Foundation have donated $4 million dedicated to providing engaging STEM curriculum for Santa Clara area students.

Super Bowl High School Honor Roll: Designed to link the past 49 Super Bowls with this year’s game, program recognizes the high schools and communities that have positively impacted the game of football. This 50 Tour Super Bowl High School Honor Roll display will feature the greater Bay Area high schools and communities that have contributed to Super Bowl history, highlighting 99 players and coaches from the greater Bay Area region. Honored high schools will receive a commemorative Wilson golden football for every player or head coach who has appeared in a Super Bowl.

PLAY 60, Play On: Produced in partnership with the NFL Foundation, this interactive play zone will include an NFL PLAY 60 obstacle course, football-themed play extravaganza’s led by Playworks and an Imagination Playground – an innovative play system that inspires children’s creativity. This zone will be one element of the PLAY 60, Play On legacy initiative which brings the nation’s best play programs together to impact tens of thousands of low-income children, youth, and young adults – both in the Bay Area and around the globe – by combining football, fun, fitness and philanthropy. In partnership with KaBOOM!, Playworks, and U.S. Fund For UNICEF, Play 60, Play On will bring physically active, imaginative and interactive play to children where they are.

The Re(a)d Zone: This family-friendly space will encourage a love for reading with access to thousands of digital titles and learning games and NFL players and Legends and other local celebrities hosting reading hours as part of the Host Committee’s early literacy initiative focused on increasing third-grade proficiency throughout the Bay Area.

Autograph Sessions: Fans will have the opportunity to meet current and former NFL players, as well as other Bay Area champions.

The 50 Tour will be joining community events and festivals during the months of September through November. The schedule of events and locations is set for the following dates (more stops to be added):

“There’s nothing quite like the Super Bowl, and the Bay Area has been fortunate to celebrate more Super Bowl victories than any other region,” said Steve Young, Hall of Famer, Super Bowl XXIX MVP and former 49ers quarterback.

“This Super Bowl is much more than a game – it’s a celebration that will be experienced throughout the Bay Area as we count down to Super Bowl 50,” said Jim Plunkett, two-time Super Bowl Champion, Super Bowl XV MVP and former Oakland Raiders quarterback. “It will be exciting to see Bay Area fans coming together to celebrate the impact our region has on the sport of professional football.”

Meet Joe Panik on August 29th at Classic Materials Sports & Collectibles. San Francisco Giants fans will get a chance to meet the Giants’…