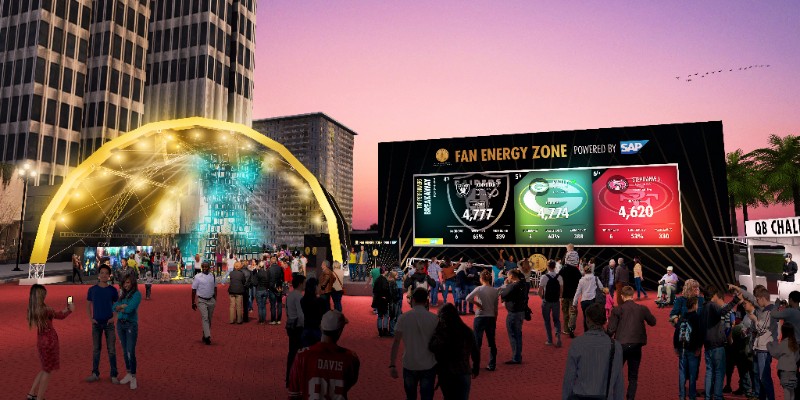 Recently, the Super Bowl 50 Host Committee unveiled one of its prime fan experiences, the Fan Energy Zone Powered by SAP. To be centered in the heart of Super Bowl City presented by Verizon in San Francisco, the Fan Energy Zone celebrates the Bay Area’s leadership in technology and innovation, and will showcase the latest in interactive gaming, social media and data visualizations.

“The Bay Area is the epicenter for innovation, creativity and technology, so what better way to introduce fans to our region than by building the most interactive fan experience ever,” said Keith Bruce, CEO of the Super Bowl 50 Host Committee. “Our partnership with SAP will allow fans to step into the action on the gridiron and experience the game in new and socially-connected ways.”

The Fan Energy Zone will include three different but interlinked areas: the Fan Dome, the Fan Wall and the Fan Stage.

In the 40 foot tall Fan Dome, fans become players as they step into interactive games. Fans play as digital avatars on giant screens and their movements are replicated by motion sensors that light up the Fan Dome.

The Fan Wall is a 50 foot wide video wall that will capture the visual and virtual excitement of Super Bowl City. It will display the leader boards and stats from the Fan Energy Zone games, user-generated content, social media visualizations and live video feeds from around Super Bowl City.

The Fan Stage will be the “live” area of the Fan Energy Zone, serving as a presentation space for community partners, celebrity appearances and autograph signings, and the main space for the DJs and MCs.

In a break from tradition, Super Bowl City will be open for an extra weekend this year, providing many local residents the opportunity to experience the excitement of Super Bowl 50. Both Super Bowl City and the NFL Experience Driven by Hyundai will open Saturday, January 30 – with the day’s activities topped off by the official re-lighting of the iconic Bay Lights on the Willie L. Brown, Jr. Bay Bridge.