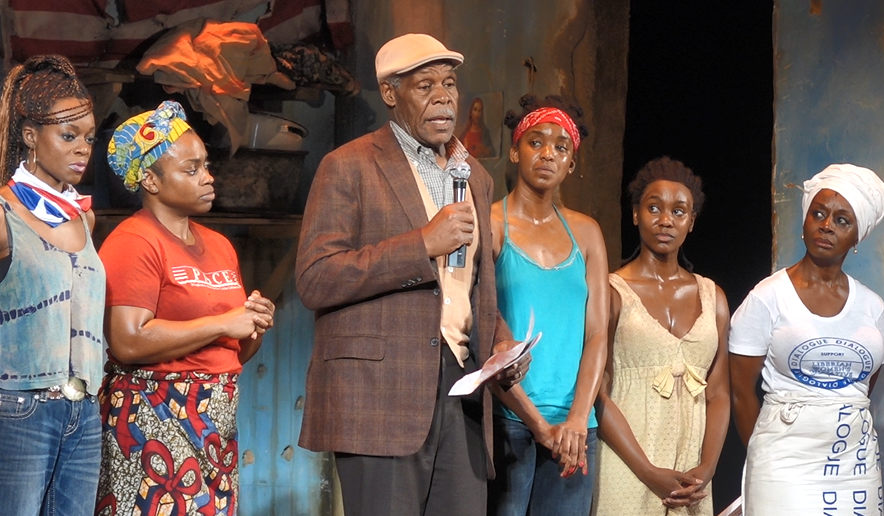 Danny Glover, actor, humanitarian, and San Francisco native led the curtain call speech today at the student-only matinee of Eclipsed. Danny Glover dedicated the performance to girls from around the world who have been kidnapped and are still missing, specifically naming two girls who were abducted from the Chibok Shook in Northern Nigeria by the Boko Haram in April 2014. Danny Glover told youth in attendance “You will make history in your communities.” Watch the video above to see our Danny Glover interview, and exclusive footage of his speech to the students who came to see the play.

The critically-acclaimed production of Eclipsed is only in town until March 19th. Tickets are available here. The cast of Eclipsed: JONIECE ABBOTT-PRATT (Orange is the New Black), AKOSUA BUSIA (The Color Purple), AYESHA JORDAN, ADEOLA ROLE, STACEY SARGEANT (Glee).

Eclipsed is the story of five extraordinary women brought together by upheaval in their homeland of Liberia. They forge a close-knit community, one that inspires them to feats of increasingly greater strength. Written by playwright Danai Gurira (star of AMC’s “The Walking Dead”) and directed by Liesl Tommy (whose critically acclaimed Bay Area productions include Ruined, Party People and Hamlet),

You’ll Fall in Love With WWE Diva Paige in this Wrestlemania 31 AXXESS Interview!

WWE Diva and “Total Divas” star Paige signed hundreds of autographs and posed with fans for photos on Thursday night at Axxess, and the…