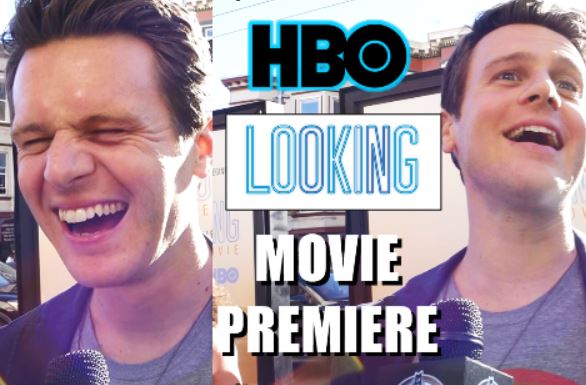 Jonathan Groff, known for Hamilton, Frozen, and MindHunter (coming 2017 on Netflix), was all smiles as he celebrated Pride Week and the sold-out showing of the Looking Movie Premiere at the Castro Theatre on Sunday Night. He was joined by castmates Frankie J. Alvarez, Lauren Weedman, Murray Bartlett, Russell Tovey, and Raúl Castillo. Director Andrew Haigh and Creator Michael Lannan were also onhand.

‘Looking’ offers up the unfiltered experiences of three close friends living — and loving — in modern-day San Francisco. Friendship may bind them, but each is at a markedly different point in his journey: Patrick (Jonathan Groff) is the 29-year-old video game designer getting back into the dating world in the wake of his ex’s engagement; aspiring artist Agustín (Frankie J. Alvarez), 31, is questioning the idea of monogamy amid a move to domesticate with his boyfriend; and the group’s oldest member — longtime waiter Dom (Murray Bartlett), 39 — is facing middle age with romantic and professional dreams still unfulfilled.

The trio’s stories intertwine and unspool dramatically as they search for happiness and intimacy in an age of unparalleled choices — and rights — for gay men. Also important to the ‘Looking’ mix is the progressive, unpredictable, sexually open culture of the Bay Area, with real San Francisco locations serving as a backdrop for the group’s lives. Rounding out the ‘Looking’ world are a bevy of dynamic gay men including Kevin (Russell Tovey), Lynn (Scott Bakula), and Richie (Raul Castillo), as well as a wide-range of supporting characters like Dom’s roommate Doris (Lauren Weedman), Agustín’s boyfriend Frank (O.T. Fagbenle), and Patrick’s co-worker Owen (Andrew Law).

‘Looking’ was created by Michael Lannan and is executive produced by Sarah Condon (‘Bored to Death’) and Andrew Haigh, who wrote and directed the critically-lauded ‘Weekend.’

The movie will answer many questions, but leave some open as well.  Jonathan Groff, Frankie J. Alvarez and Murray Bartlett return with the rest of the cast. Jonathan Groff’s character, Patrick, returns to San Francisco for the first time in almost a year to celebrate a wedding with his friends. But, he must face the unfinished business and relationships he left behind and make tough choices about what’s important to him.