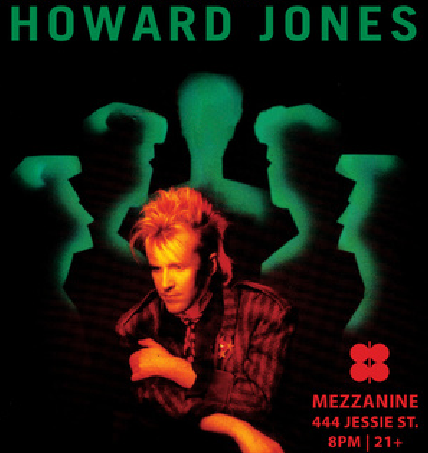 80’s pop star Howard Jones will return to the stage at Mezzanine tonight to give the San Francisco audience an exciting and interactive performance in an upbeat, electronic show. Fans can download the Engage app on both appstores today for free and use it during the concert to get the maximum effect of the sound, visuals and energy that makes up the new Howard Jones experience. Grab your tickets here. Mezzanine is located at 444 Jessie Street in Mint Plaza (off of Mint and 5th streets between Market and Mission streets) in San Francisco’s Central Market/SOMA district.

Engage is a new crowd funded multi media project from Howard Jones released in 2015. It is available as both audio and as a movie in iTunes. The CD/DVD is available on howardjones.com and at all good record stores. A small number of special edition ‘interactive book’ versions of Engage are also available at howardjones.com Howard Jones’ new project ENGAGE is his most ambitious to date. Conceived as a multi-media live experience, it brings together classical, pop, cinematic and electronic influences and fuses this with ballet, contemporary dance and philosophy. With audience involvement, the use of Apps, costume, makeup and vocal participation, ENGAGE is the message!

Choose from a number of digital interactions including:-
* A digital glove to wave in the air
* Scrolling message which you can change
* A flashing light to shine

A bonus free music track “The Human Touch” is also included.
It was in 1983 that Howard Jones first burst upon the contemporary music scene and brought his very English song-writing and pioneering synthesizers to an unsuspecting world. Anyone who was around in the mid to late eighties will remember those high energy gigs and his first two albums Human’s Lib and Dream into Action. They lived in the higher reaches of the album charts in the UK, USA, Germany, Italy, Sweden, Canada, Australia and many other countries in the 1984-86 period and the hits kept coming…”New Song”, “What is Love?”, “Pearl in the Shell”, “Hide and Seek” (which he performed at Live Aid in 1985), “Like to Get to Know You Well”, “Look Mama”, “Things Can only Get Better”, “Everlasting Love” and the quintessential “No One is To Blame”, which reached No.1 in the US.

Always one to take chances, Jones continues to write great songs inspired by his Buddhist beliefs as is evident on his latest studio album Ordinary Heroes which features a string quartet on every track and one of the best Welsh male voice choirs in the world The Morriston on the song “Soon You’ll Go”.

But will mark the return of one of the true eighties icons and godfathers of modern electronic dance music in full electric mode. If you were too young the first time around it’ll be a chance to find out where all those beats and sounds came from, and if you were around it’ll bring all those memories flooding back.