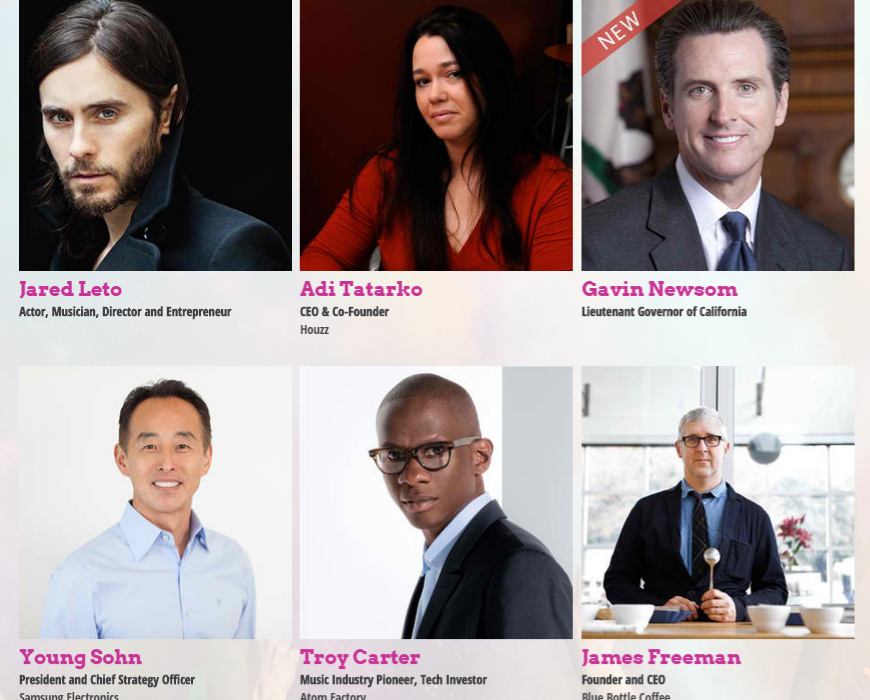 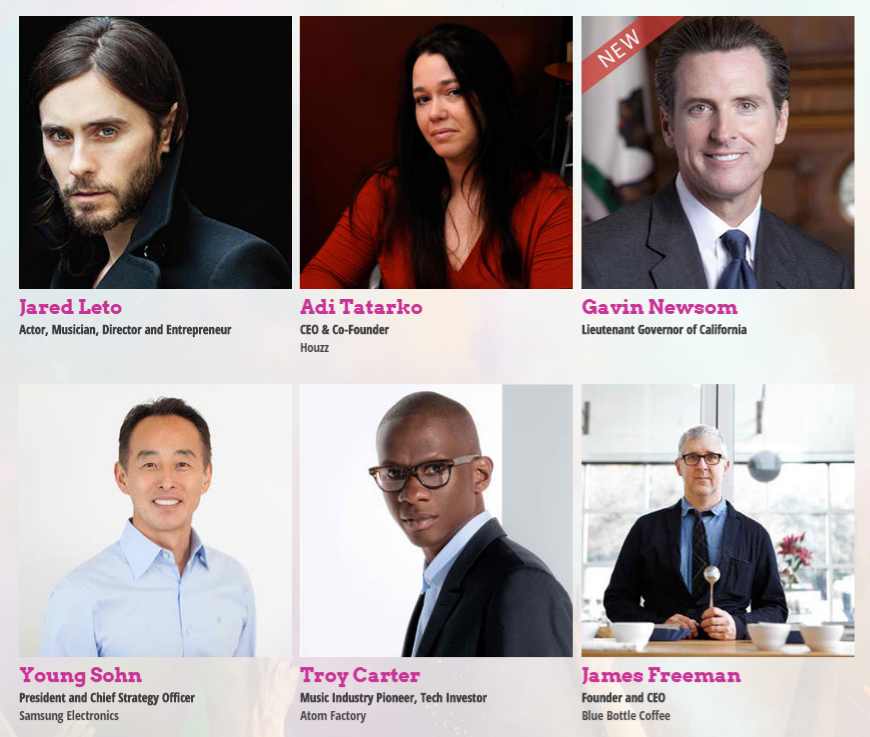 Where in San Jose can you find Oscar Winner Jared Leto, Justin Bieber & Ariana Grande Manager Scooter Braun, Lieutenant Governor Gavin Newsom, and the President of Samsung Electronics all under one roof? If you haven’t heard, it’s called Techmanity, the official conference of Silicon Valley celebrating the companies, entrepreneurs, inventors & investors who are revolutionizing our world. It’s all happening at the San Jose Convention Center Wednesday, October 1st, and Thursday, October 2nd. Tickets for the two-day event range from $395 to $895.  Check out our Techmanity Preview:

Oscar Winner and entrepreneur Jared Leto will talk about the power of technology in entertainment, engaging and building an audience that matters, and why every entrepreneur should champion a cause. Leto is a Hollywood triple-threat: actor, musician, and now entrepreneur. His work as the frontman of the band Thirty Seconds to Mars — a band that has sold over 5 million albums worldwide — spurred his interest in how technology can help musicians promote their art while still getting a fair cut. His companies include The Hive, a social media, digital marketing and e-commerce company; Adventures in Wonderland, which provides unique VIP experiences for fans to meet artists, and; VyRT, a platform that provides a social theater around premium live content. His documentary Artifact, looking at his band 30 Seconds to Mar’s legal dispute with their former record label, won the People’s Choice award for documentaries at the 2012 Toronto International Film Festival. Jared is also an actor with over two decades of notable roles, including most recently a performance as the transgender AIDS patient, Rayon in Jean-Marc Vallee’s Dallas Buyers Club opposite Matthew McConaughey. The role earned him Best Supporting Actor honors from more than 30 critics’ organizations and an Academy Award.

During the both days of the conference, Techmanity will be featuring the most dangerous and disruptive new start ups as part of its special Startlandia exhibit at the event. Located in the Executive Ballroom Lobby, there will also be an exclusive networking reception, open to all ticketholders, on October 1st at 5:00pm.

Presented by Samsung, on Wednesday, October 1, Techmanity will honor one company and two individuals who exemplify the Techmanitarian ethic of applying technology to benefit humankind. A mix of Silicon Valley and Hollywood change-makers will come together to celebrate honorees at Techmanity’s marquee VIP event, The Techmanitarian Awards. This blow out bash will feature a hosted bar, tantalizing bites and exclusive performance from funk/ hip hop sensation Crown and the Mob and special surprise guests. The 2014 Honorees are Participant Media, Nicholas Negroponte, and Aaron Swartz (posthumous award).

Inside the Hacker World of “Scorpion” (Thurs, October 2, 4:45PM, Hall 1) – Open to all Ticketholders

Join the cast and crew of the new CBS genius drama Scorpion for a screening of an episode and Q&A to follow. Members of the cast & crew of “Scorpion” scheduled to appear include the Executive Producers, Elyes Gabel who plays “Walter O Brien,” and Scooter Braun. Braun, one of the entertainment industry’s biggest power brokers, is founder of SB Projects, a company at the intersection of music, film, television, technology, brands, culture and social good. Braun serves as executive producer on the upcoming films “The Giver” (August 2014), “Jem and the Holograms” (2016) and a new CBS show “Scorpion,” which premiers this fall. SB Projects continues to impact and intersect new verticals under its tech incubator, Silent Labs, which holds investments in companies including Uber, Spotify, Songza, Fahlo and Pinterest. Braun has recently paired with BBH agency to launch The Creative Studio, a production company focused on helping small artists with branding. As Braun continues to expand SB Projects, he remains committed to the company’s founding philosophy of giving back. He serves as Chair to the Advisory Board of Pencils of Promise, a non-profit organization that builds schools in developing countries. Braun was one of Time Magazine’s 2013 “100 Most Influential People in the World,” Billboard’s 2013 “40 Under 40” headliner, and one of Fast Company’s “100 Most Creative People in Business.”

Weezer, Kongos, & The Young Rising Sons will be performing live to close out the two-day festivities.

A unique sense of humor, irresistible musical hooks and endearing geekiness have made Weezer one of the most popular alternative rock acts of the last two decades.  The band has accumulated an arsenal of tasty guitar pop tunes including “Undone (The Sweater Song),” Buddy Holly,” “Say It Ain’t So, “Islands in the Sun,” and “Beverly Hills.  Led by the songwriting talents of Rivers Cuomo, the band is set to head back to the top of the charts with its much-anticipated new album, Everything Will Be Alright in the End, produced by the Cars’ Ric Ocasek.  The album is set for release on September 30 and the band headlines at Techmanity 2014 October 2.

The brothers KONGOS — multi-cultural, multi-faceted, multi-instrumentalists – are taking America by storm.  It is impossible to watch promos for NFL, NBA and ESPN without hearing their irresistible hit single, “Come With Me Now.”  Like Arcade Fire and Mumford and Sons before them, the music crafts a unique and riveting sound spawned from shared DNA, diverse influences and spot-on melodic and lyrical sensibilities. On “Lunatic,” their 12-song Epic Records debut, the band’s talent shines on “Come With Me Now”; the title an impossible-to-resist aural summons, the rock-alt crossover tune kicking off with the accordion, jumping into foot-stomping, staccato rhythms, slide guitar, and soaring epic soundscapes reminiscent of U2. “I’m Only Joking,” whose lyrics hint at the album’s title, hits the mark with decisive tribal rhythms and Pink Floyd-esque mysterious modern rock.

For all the time in between, check out all these top-notch speakers & events:

The Secret to Building a Cult Brand

Maverick Moments: Crowdfunding for a Cause
Vivienne Harr
Make a Stand

Maverick Moments: An Accelerator to Give Back
Marissa Sackler
Founder: BeeSpace

Location Info
The following take place on the 2nd floor of the SJCC:

It’s that time of year again, Bay Area! Get ready for some big-time laughs from the hottest names in comedy and entertainment because the…