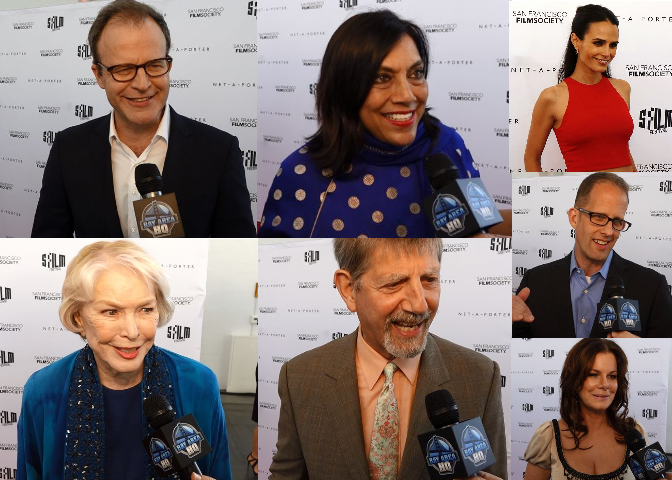 Monday night saw an eclectic group of cinema all-stars receive awards from the 59th annual SFIFF, the San Francisco Film Society. The star -studded red carpet featured several Hollywood actors and actresses, Oscar winners, nominees, and Bay Area arts and entertainment icons. While Jordana Brewster (Fast & Furious series) and Stephen Fry (The Man Who Knew Infinity) made brief pit stops for photo ops, we caught up with all the awards recipients, and notable presenters. Peter Docter, the man who directed Pixar’s Monsters Inc., Up, Inside Out  was in attendance to present the Kanbar Storytelling Award to Tom McCarthy, oscar-winning writer and director of Spotlight. Marcia Gay Harden, who won a Best Supporting Actress Oscar for Pollock, excitedly talked about her role in presenting the Peter J. Owens Acting award to Ellen Burstyn, who also won an Oscar for her performance in Martin Scorsese’s Alice Doesn’t Live Here Anymore. Local favorite, Tony Taccone, was excited about not only working with Mira Nair on the upcoming musical run of Monsoon Wedding in the Bay Area, but also to be presenting her with the Irving M. Levin Directing Award. We were also interested to find out that Peter Coyote, recipient of the George Gund III Craft of Cinema Award, has written two great books you should explore: Sleeping Where I Fall & The Rainman’s Third Cure. One of the city’s most highly anticipated cultural events, Film Society Awards Night is co-chaired by Heidi Castelein and Victoria Raiser and sponsored by Net-a-Porter.

“Ellen Burstyn’s extraordinary career in film and television has provided some of cinema’s most indelible performances,” said SFFS Executive Director Noah Cowan. “She has collaborated with some of the medium’s finest directors over many years and in a remarkable range of genres. Her recent performance in Todd Solondz’s Wiener-Dog is perhaps her bravest yet—caustic, sincere and unforgettable.”

Ellen Burstyn’s illustrious 60-year acting career encompasses film, stage and television. In 1975, she became the third woman in history to win both the Tony Award and the Academy Award in the same year, for her work in Bernard Slade’s Same Time, Next Year on Broadway and in Martin Scorsese’s Alice Doesn’t Live Here Anymore, for which she also received a Golden Globe nomination and a British Academy Award for Best Actress. She became a “triple crown winner” when she won her first Emmy for a guest appearance in Law & Order: SVU (2009), to add to her Oscar and Tony. In addition to a second Emmy for USA’s miniseries Political Animals in 2013, Ellen has received four other Emmy and five other Oscar nominations. In 2014, she was inducted into the Theater Hall of Fame and honored with the Mary Pickford Lifetime Achievement Award by the International Press Academy. In 2015, she received the Bronze Horse Award at the Stockholm Film Festival.

Films released later this year include James Lapine’s Custody and Todd Solondz’s Wiener-Dog, screening at SFIFF59. She appears in the current season of CBS’s Mom with Allison Janney and season four of Netflix’sHouse of Cards. Notable theater credits include numerous Broadway productions and the London production of Lillian Hellman’s The Children’s Hour (2011).

Requiem for a Dream: Darren Aronofsky’s uncompromising fable of four New Yorkers’ drug-addled pursuit of the American Dream is brought to life by outstanding performances, including Ellen Burstyn’s Academy Award-nominated portrayal of a lonely widow mesmerized by her flickering television.

Peter J. Owens (1936-1991) was an actor, a film producer, a philanthropist and an important supporter of the Film Society. The organization is grateful to Scott Owens and the entire Owens family for continuing his legacy by endowing this award, which honors an actor whose work exemplifies brilliance, independence and integrity.

“Spotlight won Best Picture at the Academy Awards this past year for many reasons, but its precise script, filled with perfectly conceived characters, inarguably set the tone and provided the heart and soul of the film,” said Noah Cowan, Executive Director of the San Francisco Film Society. “Tom McCarthy shared the Best Original Screenplay award as a result, acknowledging his mastery of dramatic form. But students of the cinema have been aware of his storytelling prowess, from the sublime The Visitor to the irrepressibly cleverUp. We are thrilled that he will join us as a 2016 awardee.”

Tom McCarthy is an Oscar®-winning filmmaker—a prolific writer, director, actor and producer. McCarthy’s most recent film Spotlight, which he co-wrote and directed, won the 2016 Oscar for Best Picture and Best Original Screenplay. Spotlight was nominated for six Oscars in total including one for McCarthy for Best Director. For Spotlight, McCarthy received a Directors Guild of American nomination and two Golden Globe nominations (for Best Screenplay and Best Director); and he won the BAFTA award for Best Original Screenplay, as well as a Writer’s Guild of America Award (for Best Original Screenplay). McCarthy’s previous directorial efforts include The Visitor  (which received an Oscar nomination for Best Actor for its film’s star Richard Jenkins); Win Win,  starring Paul Giamatti and Amy Ryan; and his acclaimed first feature The Station Agent, starring Michelle Williams, Peter Dinklage and Patricia Clarkson. McCarthy also co-wrote the animated feature Up, for which he received his first of three Oscar nominations (for Best Original Screenplay). As an actor, McCarthy made his screen debut in the 1992 film Crossing the Bridge  and went on to appear in such films as Flags of Our Fathers; Syriana; Good Night, and Good Luck; and Meet the Parents; and in the final season of HBO’s critically acclaimed series The Wire.

The Station Agent: Railway enthusiast Finbar McBride (Peter Dinklage) looks forward to a life of solitude and endless solo walks along the railroad tracks when he inherits an abandoned train station, only to find himself pulled into a group of new friends, who push back against his boundaries in Tom McCarthy’s witty, bewitching first feature. The Station Agent marked future Oscar® winner McCarthy as a filmmaker in complete control of his art and craft.

Acknowledging the crucial role that storytelling plays in the creation of great art, the Kanbar Award for excellence in storytelling is made possible through the generosity of Maurice Kanbar, longtime member of the SFFS board of directors, film commissioner and philanthropist with a particular interest in supporting independent filmmakers. Kanbar is the creator of New York’s first multiplex theater and, most recently, Blue Angel Vodka.

“Peter Coyote is a Bay Area institution, and he has been an integral part of this film community for decades,” said Noah Cowan, executive director of the San Francisco Film Society. “His tireless efforts in defense of the arts are truly inspiring, and it is a great pleasure to be honoring someone whose values so closely reflect our own as an organization.”

Peter Coyote is an accomplished actor, a gifted voiceover artist, a distinguished writer and a talented musician with more than 300 film and television credits to his name. He has performed as an actor for some of the world’s most distinguished filmmakers, including Barry Levinson, Roman Polanski, Pedro Almodóvar, Steven Spielberg, Martin Ritt, Steven Soderbergh, Sydney Pollack and Jean-Paul Rappeneau. In 2000 he was the cohost of the Oscars with Billy Crystal.

He is an Emmy Award-winning narrator of over 120 documentary films, including Ken Burns’ National Parks,Prohibition, The West, The Dust Bowl and The Roosevelts, for which Coyote received his second Emmy nomination in July 2015. Coyote has written a memoir of the 1960s counter-culture called Sleeping Where I Fall which received universally excellent reviews, appeared on three best-seller lists, sold five printings in hardback and was re-released with a new cover and afterword in May, 2009. A chapter from that book, “Carla’s Story,” won the 1993–94 Pushcart Prize for excellence in non-fiction. His latest book, The Rainman’s Third Cure: An Irregular Education, about mentors and the search for wisdom, was released in April 2015 by Counterpoint Press.

From 1975 to 1983 Coyote was a member and then Chairman of the California State Arts Council. During his Chairmanship and under his tenure, expenditures on the arts increased from $1 million to $16 million annually. He is an ordained Zen Buddhist priest who has been practicing for 40 years and is currently in the process of receiving Transmission from his teacher granting him autonomy and the right to ordain priests and establish his own lineage. He is and has been engaged in political and social causes since his early teens. He considers his 1952 Dodge Power Wagon to be his least harmful addiction.

George Gund III was an avid film lover and distinguished philanthropist whose unwavering support of the San Francisco Film Society spanned more than four decades. He led the organization and its annual San Francisco International Film Festival into a period of unprecedented growth and success, resulting in a robust year-round cultural institution that now reaches more cinema enthusiasts and supports more filmmakers than any other time in its history. Created in 2011, the George Gund III Award pays homage to Gund for the more than 40 years of service to the organization and will be given periodically to a member of the film community in recognition of their distinguished service to cinema as an art form.

“Mira Nair has brilliantly bridged American and South Asian film traditions for more than 30 years, and it is a distinct pleasure to award her with the Film Society’s highest honor for directing,” said SFFS Executive Director Noah Cowan. “I can’t think of anyone who better embodies the spirit of internationalism, independence and passionate storytelling that defines our Festival, and I can’t wait to celebrate her with a screening of one of her greatest films and to get an early look at what she’s working on next.”

Mira Nair was born and raised in Rourkela, India and went on to study at Delhi and Harvard universities. She began as an actress before segueing to make documentaries. Her narrative feature debut, Salaam Bombay!(1988) won the Camera d’Or at the Cannes Film Festival and was nominated for an Academy Award for Best Foreign Language film. A resourceful and determined independent filmmaker who casts unknowns alongside Hollywood stars, Nair has directed Mississippi Masala (1991), The Perez Family (1995), Kama Sutra: A Tale of Love (1996), Hysterical Blindness (2002), Vanity Fair (2004), The Namesake (2006), Amelia (2009) and The Reluctant Fundamentalist (2012).

The Film Society and its year-round exhibition, education and filmmaker services will benefit from the Film Society Awards Night fundraiser honoring Nair. The star-studded event will also honor Peter Coyote, the recipient of the George Gund III Award for outstanding contributions to the craft of cinema, and the soon to be announced recipients of the Peter J. Owens Award for excellence in acting and the Kanbar Award for achievement in storytelling. Heidi Castelein and Victoria Raiser are co-chairs of this year’s gala, which is sponsored by NET-A-PORTER.COM.

The Irving M. Levin Directing Award (previously the Founder’s Directing Award) is presented each year to a master of world cinema and is given in memory of Irving M. Levin, visionary founder of the San Francisco International Film Festival in 1957. The award is made possible by Irving’s son and current SFFS board member Fred M. Levin and Fred’s wife Nancy Livingston. It was first bestowed in 1986 on iconic filmmaker Akira Kurosawa, and for many years carried his name.

The Cleveland Cavaliers are coming to the Bay this week to face the Golden State Warriors in a Friday night fling and to coincide,…