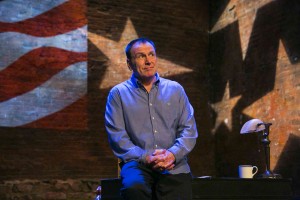 On May 25th, 1787, fifty-five delegates in wigs and tights sat down to create a country from scratch. In 2014, comedian and satirist, Colin Quinn tackles 227 years of American constitutional calamities in 70 minutes in his hit one-man show, Colin Quinn Unconstitutional. Quinn offers his unique comedic perspective on our national character in a blazing fast and hilarious US history lesson. From predator drones to the Kardashians, Quinn doesn’t pull any punches in asking if this is really what the founding fathers had originally planned. Tickets ($27/$42) are still available to see the show at the Rio Theatre in Santa Cruz at 8Pm on Friday, May 2nd, 2014.

Colin Quinn began his stand-up career as a regular on the New York comedy club circuit. He made his TV debut as co-host of MTV’s game show Remote Control. In 1995, Quinn landed a spot on Saturday Night Live, where he stayed for five seasons. Quinn tackled societal issues on Comedy Central’s Tough Crowd With Colin Quinn, and appeared in films, A Night at the Roxbury, Comedian, and Adam Sandler’s Grown Ups. Colin has had great success with his one-man shows: Colin Quinn—An Irish Wake and the hit Broadway show Colin Quinn Long Story Short, directed by Jerry Seinfeld. Long Story Short was nominated for a Drama Desk Award and the HBO special was nominated for an Emmy in 2011. Colin is currently the king of Twitter and is back on the new season of HBO’s Girls.

Interview & Highlights! 49ers’ Colin Kaepernick Had A Blast Coaching & Playing with Kids at his 2015 ProCamps Session!