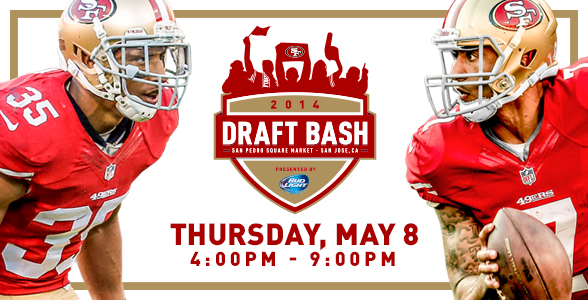 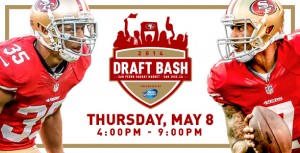 The Draft Bash will include food, music and entertainment, interactive sponsor booths, the latest 49ers merchandise, and a live broadcast of the 2014 NFL Draft which begins promptly at 4 p.m. to be displayed on large outdoor screens. Performances by the Gold Rush Cheerleaders, Niner Noise, and guest appearances by Sourdough Sam, 49ers players and alumni are expected. Attendees will be kept in the know with Draft Day commentary from the voices of the team, Ted Robinson and Tim Ryan.

Last year, fans gathered in San Pedro Square as the 49ers traded up to snag Safety Eric Reid for the 18th Overall Pick.  However, the most notable draft party reaction in recent years, was captured here, when the 49ers selected Wide Receiver Michael Crabtree in the first round.

Fans must enter the drawing to be selected for tickets to Draft Bash by registering here. Due to overwhelming demand, this will be the only way to secure tickets to the event. Printed tickets must be presented at the gate in order to attend.

Oakland Raiders Derek Carr Got Personal in Epic Sermon – (VIDEO) “I used to smoke weed, party, have sex with whoever I wanted,” said…