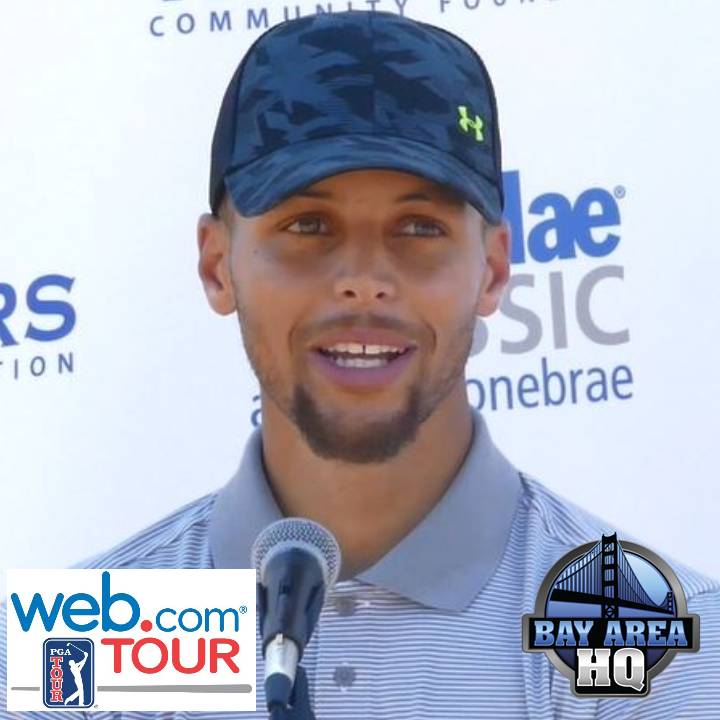 Steph Curry had his first press conference at this year’s 2017 Ellie Mae Classic. Tickets are available now for Thursday – Sunday for practice rounds.  The course is not open to the public Monday & Wednesday during Pro-Ams.

The Web.com Tour and Ellie Mae previously announced that 2017 National Basketball Association (NBA) champion and Golden State Warriors All-Star guard Steph Curry will play in the Tour’s Ellie Mae Classic at TPC Stonebrae, to be contested the week of July 31-August 6.  Steph Curry will maintain his amateur status in the event and will compete on an unrestricted sponsor exemption.

“We are elated to have Steph Curry compete in this year’s Ellie Mae Classic at TPC Stonebrae,” said tournament director Trish Gregovich. “Our longstanding goal has been to create a meaningful community impact through this event, and allowing a true pillar of the Bay Area community and a genuine sports superstar inside the ropes to compete alongside future PGA TOUR stars helps to elevate that effort.”

Curry, a member of the Warriors since 2009, is a two-time winner of the NBA’s Most Valuable Player Award for the 2014-15 and 2015-16 seasons, and has appeared in the last three NBA Finals with the Warriors, helping lead the team to championships in 2015 and 2017. The 29-year-old is also currently the Warriors’ all-time leader in three-pointers made, and holds four of the top five single-season three-point totals in NBA history, including a record 402 three-pointers in 2015-16. Curry has been selected to three All-NBA Teams and has been a starter on the Western Conference All-Star team in each of the last four seasons.

The Warriors Community Foundation will serve as the main charitable beneficiary of the Ellie Mae Classic. The Warriors Community Foundation, the philanthropic arm of the Golden State Warriors, is committed to supporting educational equity for underserved Bay Area youth. Since its inception in 2012, the Foundation has awarded over $5 million in grants to local school districts and non-profits serving at-risk and vulnerable students. The Foundation also rebuilds public basketball courts around the region; revitalizing local communities with safe and clean places where families can enjoy basketball. Finally, the Foundation donates thousands of tickets each season to schools and nonprofits that serve low-income children, helping to share the joy and excitement of Warriors home games. Learn more at Warriors.org

In addition, the 2017 Ellie Mae Classic supports The First Tee of the East Bay. Proceeds from the tournament will help fund after school programming in Hayward. The mission of the TFTEB is “to impact the lives of young people by providing educational programs that build character, instill life-enhancing values and promote healthy choices through the game of golf.” Currently, the TFTEB serves over 600 kids in Oakland and Hayward through after-school and summer programming.

The Ellie Mae Classic also partners with the NCGA Youth on Course to fund a 4-year NCGA Youth on Course Collegiate Scholarship, which will be awarded to an East Bay high school senior. The Ellie Mae Classic also hosts the NCGA Junior Qualifier at TPC Stonebrae, awarding one talented junior an official sponsors exemption in the Web.com Tour playing field.

In 2016, Ellie Mae teamed up with the Habitat for Humanity East Bay/Silicon Valley’s Playhouse Program to build playhouses at the Ellie Mae Classic. Playhouses were donated to the Blue Stars Moms, a membership organization of mothers whose sons and daughters are serving or have served honorably in the United States Armed Forces. Their mission is to serve military personnel and Veterans’ organizations through service, with the playhouses going to military and veteran families affiliated with Blue Star Moms.

You may choose to pick a certain hole and watch each group as they play that hole. There will be pairings sheets distributed at the course with a comprehensive list of each player, in each group. Thus, as one group comes through a hole, you will be able to identify the players in that group based on the names displayed on the caddie bibs, and follow along accordingly.
You may also choose to follow a certain group or player throughout the course of their round for either 1 hole, 18 holes, or any number in between. The boundaries for each hole are set with rope and stake, and thus the areas accessible to the public will be clearly marked.

THE NATIONAL FOOTBALL LEAGUE ANNOUNCED THAT THEY HAVE TRANSFORMED THE PRO BOWL INTO “THE PRO BOWL GAMES.” MICAH PARSONS TALKS TO US.

The National Football League announced that they’ve transformed the Pro Bowl into “The Pro Bowl Games.” The first one will take place in Las…