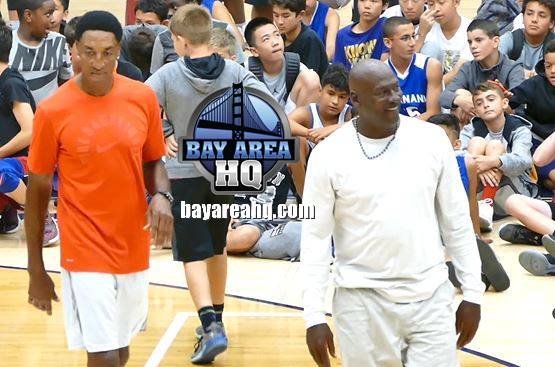 Michael Jordan and Scottie Pippen, two of the 50 greatest players in NBA history, joined forces on the basketball court for the first time in 28 years to take on some young campers in several shooting contests on Sunday night in Santa Barbara, CA at Michael Jordan Flight School 2017. Watch the video above to not only see highlights of the two Chicago Bulls champions together, but also to see Michael Jordan debut some new spectacular kicks on the court.

The Michael Jordan Flight School is among the world’s finest youth basketball camps. Learn the fundamentals of shooting, dribbling, rebounding, passing, and defense from Michael Jordan, the greatest basketball player of all time, along with his “first-class”” coaching staff.

“The Michael Jordan Flight School offers boys and girls the opportunity to learn the same principles that allowed me to become the player that I was. Teamed up with my awesome coaching staff, join us for 5 fun-filled days of learning and competition, where I hope to meet, work, and create lifelong memories with you. Come fly with me for our 22nd year!” -MJ

The Flight School basketball camp consists of two sessions: July 28 – August 1 (boys) & August 2 – August 6 (boys and girls). On the first day of camp, Overnight Camper registration will begin at 12 noon and Day Camper registration will begin at 1 pm. Dinner is the only meal served on the first day of each camp session (July 28 & August 2). Check out starts at 12 Noon and concludes at 2 pm on the last day of camp (August 1 and August 6). Campers are welcome to register for both sessions. Accommodations will be provided for campers who are registered to attend both overnight sessions. For the extra night, we require an additional fee of $100.00 to cover room and board.