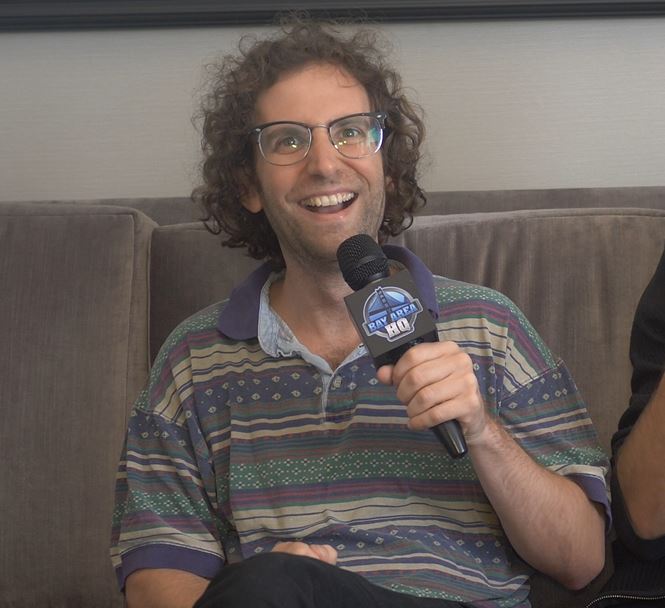 Kyle Mooney and longtime good friend Dave McCary talked to Bay Area HQ recently about their new film Brigsby Bear. The two currently work on Saturday Night Live together, but have been teaming up to make funny videos and sketches for most of their lives. Watch our TV interview above to see Kyle put his knowledge of kids’ TV shows to the test, which is relevant because Brigsby Bear was partially influenced by Kyle’s love for obscure kids shows. Kyle Mooney co-wrote the film and stars as James. We were able to see an advanced screening of the film, and think it is funny, original, and uplifting.

Brigsby Bear Adventures is a children’s TV show produced for an audience of one: James (Kyle Mooney). When the show abruptly ends, James’ life changes forever. He sets out to finish the story himself and must learn to cope with the realities of a new world that he knows nothing about.

BRIGSBY BEAR is a Sony Pictures Classics release, runs 97 minutes, is in English, and is MPAA rated PG-13 for thematic elements, brief sexuality, drug material and teen partying. Childhood is when impressionable minds open widest to the mesmerizing power of entertainment. Nearly everyone can recall connecting with a show so completely it feels like a magical world created just for you. But what if it actually was? Superfan James is obsessed with the clever if quaintly goofy kids’ show Brigsby Bear to the point of religiosity. A bright, sensitive young adult still living at home, he has grown up with this fantasy series, and the program has grown with him as well — getting more complex over the years. But to say James’ intensely protective parents have kept their son a bit sheltered is an understatement.

One dramatic night, James’ insular world is upended. Through the disorienting but sporadically hilarious transition to a new life that follows, Brigsby remains James’ security blanket and, upon learning the series has been cancelled, he adopts the old adage that the show must go on. Family members and authority figures fret over James’ fixation, but by becoming Brigsby Bear’s new creator instead of just a viewer in the dark, he finally accesses all the meaningful connections his life has lacked. By telling his story, James repairs it — producing in the process an inventively offbeat and profoundly uplifting love letter to the redemptive power of creativity.

About the Co-Writer/Actor Kyle Mooney

Kyle Mooney a repertory player on Saturday Night Live recently returned as a cast member for his fourth season. During his first season, Mooney gained recognition his digital shorts “Miley Sex Tape” with Miley Cyrus and “420” with Seth Rogen. He has also contributed his signature man on the street interviews. In addition to co-founding the Good Neighbor sketch group, Mooney has been a regular writer and performer at Upright Citizens Brigade since 2007. He starred in the HBO series Hello Ladies and the show’s movie adaptation HELLO LADIES: THE MOVIE opposite Stephen Merchant and appeared on NBC’s Parks and Recreation. Kyle also appeared in the feature films ZOOLANDER 2, directed by Ben Stiller, and NEIGHBORS 2: SORORITY RISING. Mooney studied film at the University of Southern California. He is from San Diego and currently lives in New York City.

About the Director Dave McCary

Dave McCary is currently in his fourth season as a writer and director at Saturday Night Live, and co-founder of the L.A.-based sketch comedy group, Good Neighbor. He has been nominated for an Emmy Award for his work at Saturday Night Live, and is making his feature directorial debut at the 2017 Sundance Film Festival with BRIGSBY BEAR, written by and starring McCary’s childhood friend and longtime collaborator, Kyle Mooney.

THE GOLDEN STATE WARRIORS 2022 NBA CHAMPIONS!  Just like their counterparts that are with them in the China Basin, The Warriors embraced the Bay…