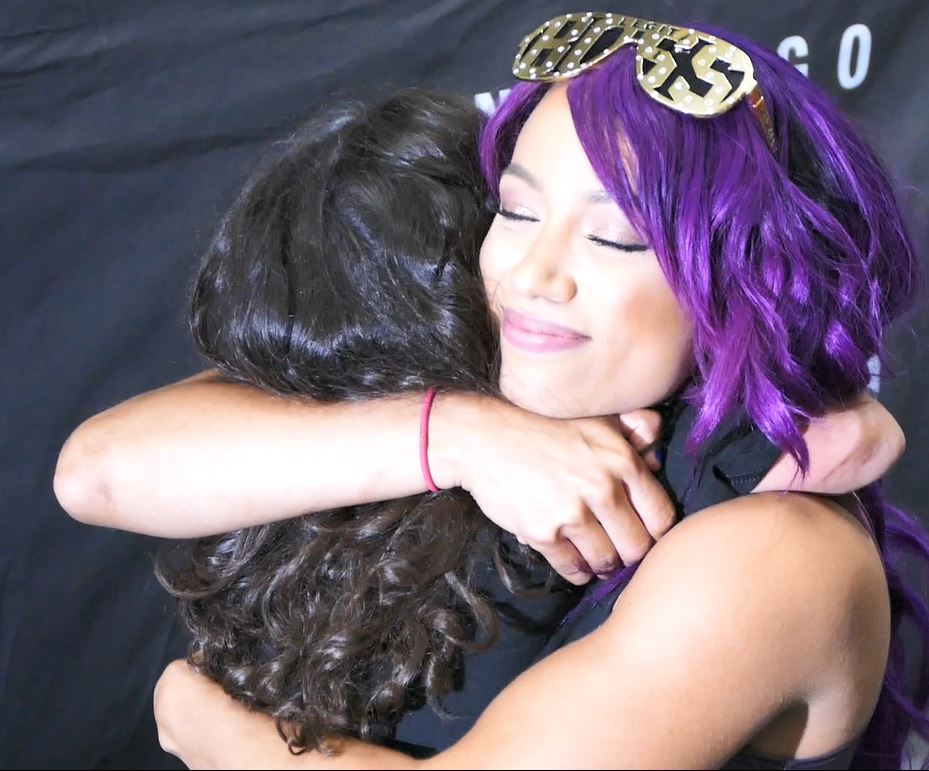 Sasha Banks and the women superstars of the WWE, The WWE Women’s Evolution, took over San Diego Comic-Con today at the WWE Mattel panel and Q & A session. The session was led by moderator  SmackDown Live commentator Renee Young and featured Bayley, Sasha Banks, Charlotte Flair, Becky Lynch, Nikki Bella and Brie Bella. Check out the video of the special moment above!

Sasha Banks & More: Mattel and WWE are launching a girls’ product line that features the first-ever fashion dolls of Nikki and Brie Bella, Sasha Banks, Natalya, Charlotte Flair, Becky Lynch, Alicia Fox and Eva Marie, to leverage the popularity of WWE’s female Superstars and give its sizable girl fan base a new way to connect with their favorite brands.

This is the first time female WWE Superstars will have a fashion doll and role-playing line, in addition to the action figures inspired by their in-ring characters. The dolls will be available for preorder online only at Toysrus.com beginning Monday, July 24, and exclusively at Toys”R”Us® stores nationwide and Toysrus.com this September.

“The launch of the first-ever WWE girls’ product line is a significant moment in the evolution of not only our female Superstars, but our entire company,” said Stephanie McMahon, WWE Chief Brand Officer. “We are honored to partner with Mattel to provide kids with another way to connect with our incredible female performers who inspire confidence and strength.”

“At Mattel, we have a deep understanding of how girls play and are proud to be WWE’s partner in bringing the first ever female Superstar fashion doll line to fans, said Lori Pantel, SVP and GM for Girl’s Toy Box. “This line shows girls that they too can be a WWE Superstar and fits well within our portfolio of girl’s brands by offering unique doll aesthetics with empowering messages.”

About Mattel
Mattel is a creations company that inspires the wonder of childhood. Our mission is to be the recognized leader in play, learning and development worldwide. Mattel’s portfolio of global consumer brands includes American Girl®, Barbie®, Fisher-Price®, Hot Wheels® and Thomas & Friends™, among many others. Mattel also creates a wealth of lines and products made in collaboration with leading entertainment and technology companies. With a global workforce of approximately 32,000 people, Mattel operates in 40 countries and territories and sells products in more than 150 nations. Visit us online at www.mattel.com.

About WWE
WWE, a publicly traded company (NYSE: WWE), is an integrated media organization and recognized leader in global entertainment. The company consists of a portfolio of businesses that create and deliver original content 52 weeks a year to a global audience. WWE is committed to family friendly entertainment on its television programming, pay-per-view, digital media and publishing platforms. WWE programming reaches more than 650 million homes worldwide in 20 languages. WWE Network, the first-ever 24/7 over-the-top premium network that includes all live pay-per-views, scheduled programming and a massive video-on-demand library, is currently available in more than 180 countries. The company is headquartered in Stamford, Conn., with offices in New York, Los Angeles, London, Mexico City, Mumbai, Shanghai, Singapore, Dubai, Munich and Tokyo.

Armistead Maupin Meet and Greet at Macy’s this Thursday

Armistead Maupin Meet and Greet at Macy’s this Thursday – Creator of “Tales of the City” to Sign Books, Meet fans, Talk New Film…