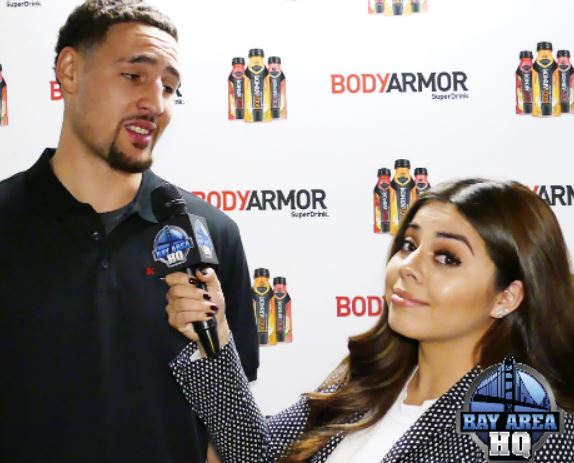 Watch Marlu Silva (Instagram: @marlusilvae) talk to Klay Thompson, just after he and BODYARMOR sports drink hosted a 3-point shootout contest and kids clinic on Thanksgiving weekend at Merritt College in Oakland. You’ll see highlights of the hoops session as well as his answers to our questions: Are there any similarities between his favorite super villain, Shooter McGavin (Happy Gilmore) and Lebron James? Does he want the Warriors to sell his own version of an ugly christmas sweater? Besides a win against the Cavs on Christmas, what gifts would he like? You’ll also hear Klay Thompson talk about the many benefits of BODYARMOR Sports Drink.

Klay participated in a youth basketball clinic for 30 young athletes as well as a 3-point shootout with consumer winners of a BODYARMOR promotion from earlier this year. Thompson, son of former NBA player Mychal Thompson, played hoops at Washington State University, set a record with Stephen Curry with 484 combined three-pointers in the 2014 – 2015 season. On January 23, 2015, Klay Thompson scored an 37 points in a single quarter, going 13-for-13, including nine three-pointers, setting an NBA-record. In 2015, he helped lead the Golden State Warriors to their first NBA championship since 1975. On February 13, he competed in the All-Star Weekend’s Three-Point Contest and won the event after defeating Stephen Curry and Devin Booker in the final round record for a single quarter.

Thompson was on the US national team that won the gold medal at the 2014 FIBA Basketball World Cup and the 2016 Rio Olympics.

BACKGROUND: BODYARMOR is a premium sports drink that provides superior hydration and is packed with electrolytes, coconut water, and vitamins.  BODYARMOR is high in potassium and low sodium and contains natural flavors, natural sweetener and no colors from artificial sources. BODYARMOR is now available in 8-great tasting flavors, and boasts a superstar roster of athlete partners and investors including Klay Thompson, James Harden, Andrew Luck, Mike Trout, Dustin Johnson, Anthony Rizzo and Dez Bryant, among others.

The Curran Kicks Off Events Leading to THE ENCOUNTER