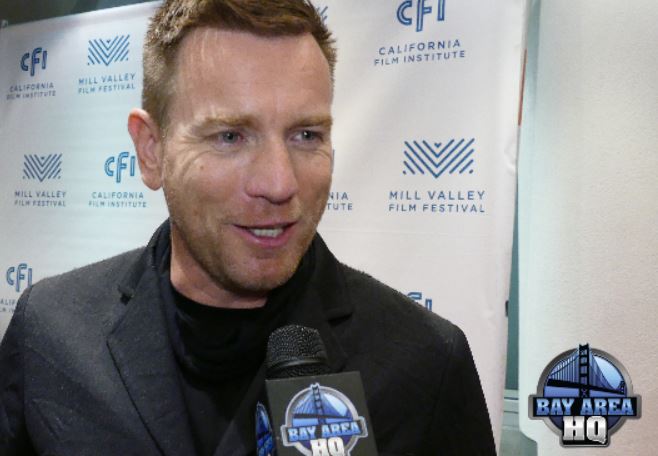 After making his mark in film for decades (Trainspotting, Star Wars, Beginners, Men Who Stare at Goats, Big Fish, Our Kind of Traitor, Miles Ahead, Angels & Demons, Cassandra’s Dream, The Island, Black Hawk Down) Ewan McGregor talks to Bay Area HQ about how his wife, Eve Mavrakis, spiked his interest in directing America Pastoral. Watch our red carpet interview with the talented actor at the Mill Valley Film Festival.

EWAN MCGREGOR Seymour “Swede” Levov (Ewan McGregor) seems destined to have it all: A sports star in high school, he marries a beauty (Jennifer Connelly), fathers a child, and settles in rural bliss while continuing to run his father’s successful New Jersey manufacturing business. But then the placid 1950s evolve into the roiling 1960s. As young Americans question the status quo, as the Vietnam War rages, as the civil rights movement evolves, destiny shifts and his perfect life begins to unravel. His increasingly politicized teenage daughter Merry (Dakota Fanning) becomes involved with an underground group and disappears after being implicated in a bombing. Swede struggles to find meaning as he searches for his lost daughter—whose own journey into the depths is portrayed with impressive nuance by Fanning. Ewan McGregor’s directorial debut, based on the Pulitzer Prize-winning Philip Roth novel, is driven by performances that embody the poignancy of human frailties struggling to navigate those turbulent times.

MVFF’s Spotlight program featured an onstage conversation with Ewan McGregor, a screening of American Pastoral, and the presentation of the MVFF Award in recognition of his auspicious directorial debut. For more screenings, visit the Mill Valley Film Festival page.

Watch Bay Area HQ’s Kirsten Moran talk with Dean Norris (“Breaking Bad,” “Under the Dome”) in an interview where he talks about San Francisco,…