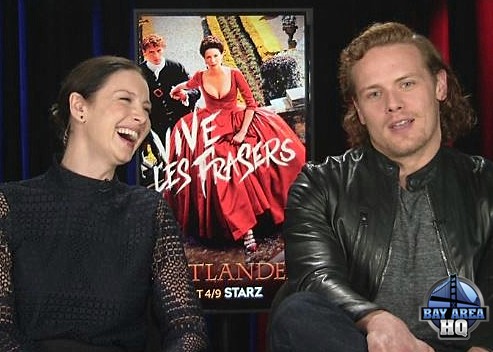 Watch this hilarious interview with Caitriona Balfe and Sam Heughan, the stars of Outlander on Starz. They play our “sex game,” talk kissing, lip balm, Gena Rowlands, and provide plenty of laughs!

We ask Caitriona about her “Dior” dress in the new season. We talk to Sam about what kind of lip balm he wears. We ask Caitriona to take us back to a short film called “Lust Life,” where she kissed a woman onscreen. We asked Caitriona if she is a fan of the movie “Gloria,” starring one of her favorite actresses, Gena Rowlands, and much much more! If you are new to the series, you can binge watch the entire first 16 episodes for free until April 9th, when the new season premieres. Before April 9th, Starz subscribers can watch the first episode now!

Starz, in association with Sony Pictures Television, has announced the return of its hit original series “Outlander” on Saturday, April 9th at 9PM ET/PT. The eagerly awaited second installment, Outlander Season 2, will be 13 episodes and is based upon the second of eight books in Diana Gabaldon’s international best-selling Outlander series, entitled Dragonfly in Amber. The series is executive produced by Ronald D. Moore (“Battlestar Galactica,” “Star Trek: Deep Space Nine,” “Star Trek: The Next Generation”). Starz also released a first look at their teaser art featuring “Outlander” couple Claire Randall Fraser (Caitriona Balfe)and Jamie Fraser (Sam Heughan) on the steps of Versailles. Instead of swords and guns, they’re armed with political savvy and the finest 1700s Parisian fashion as they embark on their new mission – infiltrating the French aristocracy and rewriting history. The new image gives viewers a taste of what’s to come in this exciting and dangerous next chapter – old world lavishness mixed with a sense of new world urgency.

Outlander Season 2 begins as Claire and Jamie arrive in France, hell-bent on infiltrating the Jacobite rebellion led by Prince Charles Stuart, and stopping the battle of Culloden.  With the help of his cousin Jared, a local wine merchant, Jamie and Claire are thrown into the lavish world of French society, where intrigue and parties are abundant, but political gain proves far less fruitful.  Altering the course of history presents challenges that begin to weigh on the very fabric of their relationship.  However, armed with the knowledge of what lies ahead, Claire and Jamie must race to prevent a doomed Highland uprising and the extinction of Scottish life as they know it.