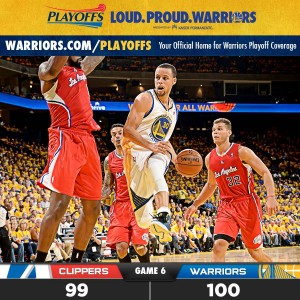 Despite less-than-stellar shooting, the Warriors held on tightly to stay alive in the first round of the 2014 NBA Playoffs. The Warriors fought hard to hold on to a lead during the final minutes and secured a 100-99 win over the Clippers  in front of another frenzied sellout crowd at Oracle Arena. Stephen Curry was the leading scorer with 24 points and nine assists and Draymond Green had an amazing game with 14 points, 14 rebounds, five steals, four assists. Andre Iguodala made a clutch 3-pointer late in the fourth quarter, and finished with 15 points. The Warriors now will head to LA to try to advance to next round.

Check out Victoria Justice in MTV’s “Eye Candy” on Monday nights at 10/9C. She sat down via satellite to talk to Bay Area HQ…