Ethan Hawke Reflects on Acting Career in San Francisco – Watch Our Interview with the Training Day actor, Who was Honored with a Special Tribute at the San Francisco International Film Festival 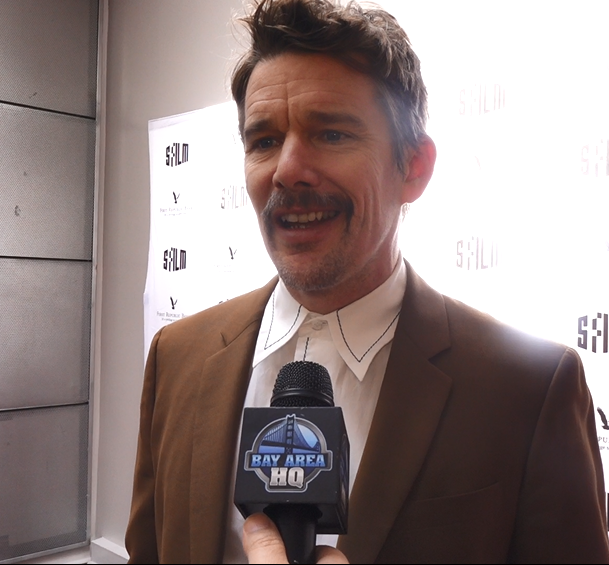 Ethan Hawke, the internationally acclaimed actor, writer, was honored by the San Francisco Film Society on Saturday during the 60th San Francisco International Film Festival with a special tribute. An intimate onstage conversation followedwith the talented and versatile performer and storyteller, and that ws followed by a screening of his new film, Aisling Walsh’s Maudie. Watch our interview with Ethan Hawke, who shed some light on acting, Paul Newman, Sam Shepard, Ed Harris and more.
“Ethan Hawke is worthy of celebration on so many levels,” said Rachel Rosen, SF Film Society Director of Programming. “It’s been a pleasure to experience his work as a director of both fiction and documentary alongside his countless indelible performances. He effortlessly communicates his artistic vision across his various creative pursuits, and we’re thrilled to be able to honor him for the full scope of his work in film.”

In a career spanning 30 years and four Academy Award nominations, Ethan Hawke has solidified his reputation as a truly multifaceted artist, challenging himself as a screenwriter, director, novelist, and actor of the stage and screen. In 2016, Hawke portrayed the late Chet Baker in Born to Be Blue, for which he received great critical acclaim, and was also seen in The Phenom, Maggie’s Plan, The Magnificent Seven, and In a Valley of Violence.

About Maudie: Stricken with juvenile rheumatoid arthritis, Maud (Sally Hawkins) faces rejection from her own family in 1930s Nova Scotia. But she finds acceptance in the home of another outsider, curmudgeonly fishmonger Everett Lewis (Festival tributee Ethan Hawke), who hires her to be his housekeeper. In his home, she blossoms as an artist-the decorative touches she adds to everyday surfaces like cookie sheets and wallboard eventually garnering her a reputation as one of Canada’s best-known folk artists. Aisling Walsh’s drama spans 35 years, depicting the growth of her unexpected career and her relationship with a difficult husband. Despite her disability and her relationship struggles, Maud’s spirit remains indomitable. Hawkins is unforgettable as an irrepressible woman who can find an upside in the most trying circumstances. Hawke imbues his difficult character with gruff charm. The difference between this odd couple is night and day. Nevertheless, they somehow fit. As Maud says, “We’re like a pair of old socks.”

Pro wrestling portrait artist Rob Schamberger will be painting a portrait of “Macho Man” Randy Savage live at the entrance of WrestleMania Axxess. One…