Peyton Manning Mobbed at 2017 ATT Pebble Beach Pro Am – Watch Autograph Hounds bombard Manning, who played in “The Million Dollar Hole in One for Charity” 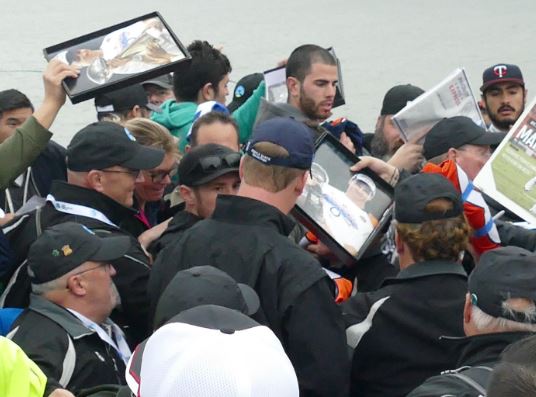 Things seemed to get out of control, on an otherwise amazing day at Pebble Beach, as Peyton Manning, who, last year, won Super Bowl 50 at Levi’s Stadium, tried to accommodate a few autograph requests after participating in Facebook’s  Million Dollar Hole in One for Charity. Peyton Manning handled the swarms of autograph seekers, many whom had multiple items of memorabilia ready for the former NFL quarterback. Peyton Manning went on to practice on the course, as he prepared for the big tournament starting today at Pebble Beach. To be fair, yesterday’s events and fan experience at Pebble Beach were well-organized and celebrities interacted with fans in a safe and cordial fashion.

One of the most exciting events on the PGA TOUR, the AT&T Pebble Beach Pro-Am is contested annually in front of over 190,000 spectators and millions of television viewers on three of the Monterey Peninsula’s premier golf courses: Pebble Beach Golf Links, Spyglass Hill Golf Course, and Monterey Peninsula Country Club Shore. Tickets are still available to catch an amazing weekend of fun and golf.

New things to see and new places to be at the 2017 AT&T Pebble Beach Pro-Am are going to enhance the already spectacular spectator experience at the Pebble Beach Golf Links, Feb. 6-12. Tickets are available now.

Unquestionably the most popular PGA TOUR event on the West Coast, the 2017 AT&T Pebble Beach Pro-Am is ready to deliver another exciting week of world-class golf and world-class fun. The best PGA TOUR professionals in the game and a knockout lineup of celebrities will tee it up on three of the Monterey Peninsula’s premier golf courses.

A hospitality venue called The View presented by GREY GOOSE debuts this year on the eighth fairway at Pebble Beach Golf Links, overlooking panoramic vistas of the eighth hole and down the ninth tee. Enjoy specialty drinks in an atmosphere normally reserved for private groups. Tickets for The View are $200 each Thursday and Friday, $250 each on the weekend, only for spectators 21 and older.

The new AT&T Fan Dome will entertain and engage fans through 360 projection of real-time tournament coverage. Admission is free and spectators can visit the tent venue at any time during tournament hours to experience the latest and greatest offerings from AT&T. The interior will also feature a virtual reality experience, an interactive course map and leaderboard table, as well as the Jordan Spieth Corner.

This year also marks the introduction of “Palmer’s Club Eighteen” on the iconic 18th fairway at Pebble Beach Golf Links – dedicated to the legendary Arnold Palmer, a Pebble Beach Company owner who passed in 2016. The upscale shared luxury suite offers magnificent views of the golf course and Carmel Bay from the upper level of a glass enclosed structure, as well as the outdoor deck. “Palmer’s Club Eighteen” is designed for spectators who want to enjoy unlimited food and beverage including breakfast, lunch, hors d’oeuvres, desserts, and top shelf spirits along with premium on-site parking all week at the tournament. Each Club Eighteen membership (for two patrons) is $8,000.

Zoe Lister-Jones on her BAND AID film, Bed Bath & Beyond

Zoe Lister-Jones on her BAND AID film, Bed Bath & Beyond – Watch the LIFE IN PIECES Star on Relationships, Directing New Film with…