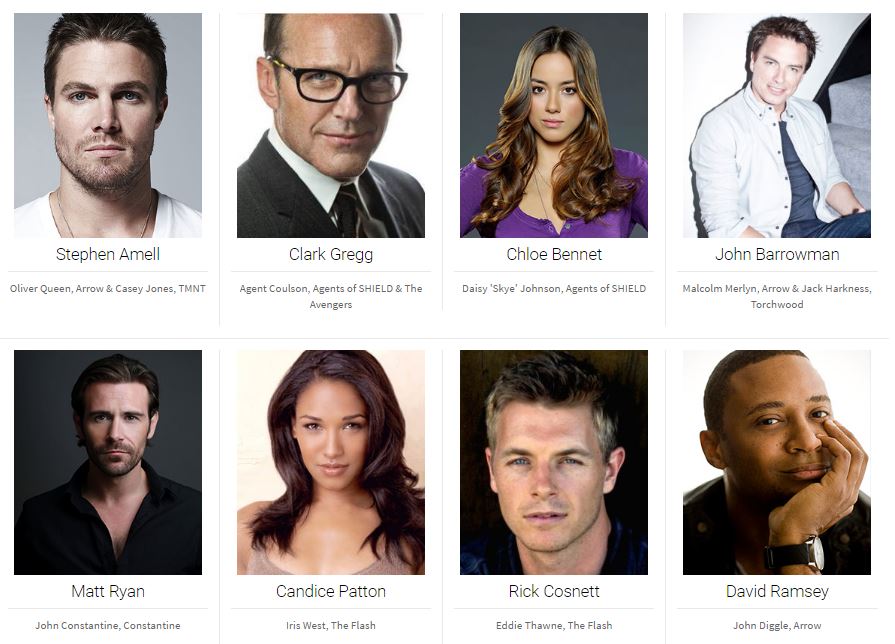 Heroes and Villains FanFest In San Jose This Weekend! Meet Major stars of ‘Arrow’, ‘Agents of SHIELD’, ‘Flash’, ‘Once Upon A Time’ & More at Convention Center

From 10:30am (9am VIP entry) to 5pm on Saturday 8/27/2016 and 10:30am (9am VIP entry) to 6pm on Sunday 8/28/2016, pop culture fans will have opportunities to explore some amazing booths on the show floor, watch live panels with stars and meet their favorite celebrities from some of the hottest TV shows in the Sci-Fi genre at Heroes and Villains FanFest in San Jose held at the San Jose Convention Center on 150 W San Carlos St, San Jose, CA 95113.

Guests will need tickets to get in (Saturday – $45, Sunday $40, 2 Day – $75) , and also will need tickets for autographs and/or photo ops. Though the photo op experience happens in a matter of 5-10 seconds, and you’ll have to wait in line, a photo with some of these international celebrities can be treasured for a lifetime. For $80, you can get a photo op with huge stars such as Stephen Amell (Arrow), Clark Gregg (Agents of SHIELD), or Chandler Riggs (Walking Dead). Think about it. For the price of ticket to just watch a 49ers or Raiders game, you can walk away with posed photo of you and one of your favorite actors. Pretty cool. All prices and talent are subject to change and availability can be gone at any minute, so visit the official site and follow the event on Twitter for the latest updates. Don’t forget VIP packages! Some are sold out, but here’s what’s left.

Here’s one version of ticket prices for photo ops (see the official site for the most current info): 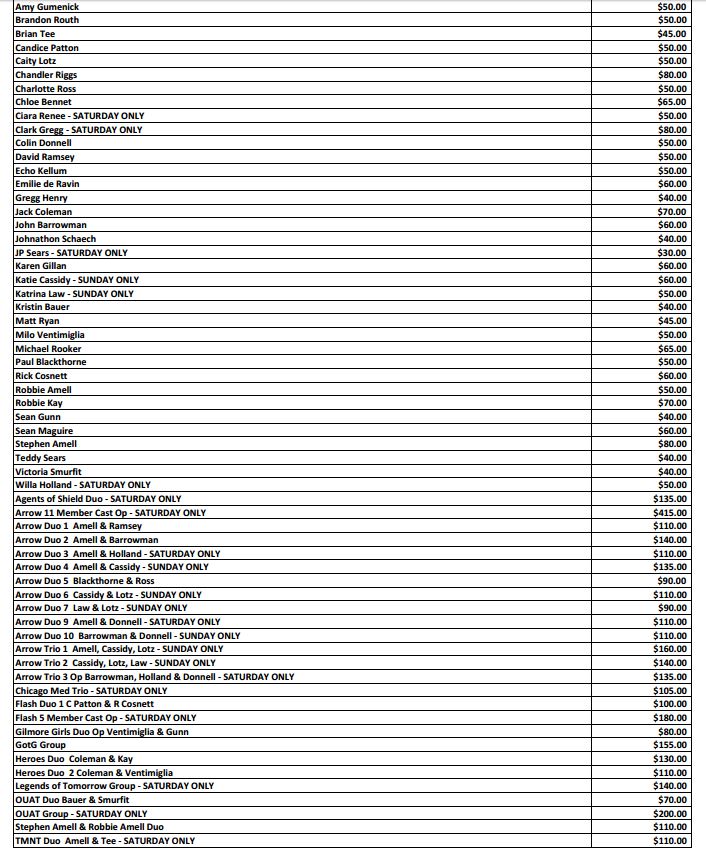 Heroes & Villains Fan Fest (HVFF), an event that is revolutionizing the comic con landscape, will be held at the San Jose Convention Center, Aug. 27­28, in San Jose, CA. San Jose marks the first city in the world that the popular HVFF will return to. Fan access to celebrity guests will be the primary focus of this event, which includes two days of immersive experiences and memories. Heroes & Villains Fan Fest ­­ the brainchild of actor Stephen Amell and James Frazier, creator of the zombie and horror event Walker Stalker Con ­­ has become an incredibly popular convention, offering something for everyone from the diehard fan to families to those with a growing interest in the genre.
More than 20 of the most popular actors from shows such as Arrow, The Flash, Legends of Tomorrow, Once Upon A Time, and more will speak to the audience, meet fans, pose for photos and sign autographs (see full list). Attendees can also participate in a range of engaging and unique activities, including:

● Panel sessions led by stars from some of television’s most popular shows.

● The Nocking Point San Jose Wine Mixer, a special event in which attendees mingle with Stephen Amell and Andrew Harding (Nocking Point co­owner) while tasting fabulous wines. Stephen and Andrew will even pour wine for the guests.

● Interactive “hero­style” games on the Con floor, fun for the entire family.

● Vendors who deal in comic, entertainment, and other genres and industries. There are even a number of opportunities to volunteer at the event, which can be found on the Heroes & Villains website.

One of the most popular elements of Heroes & Villains Fan Fest is the chance to meet and hear from stars from popular shows. In San Jose, attendees will be treated to sessions with:

● Johnathon Schaech (Jonah Hex, Legends of Tomorrow). This is the noted actor’s first appearance at HVFF.

● Milo Ventimiglia (The Ogre, Gotham, Heroes and other popular shows)

● Stars of shows including The Flash, Gotham and The Walking Dead The full lists of guests is on the Heroes & Villains San Jose website.

Fan Fest is the leading convention and entertainment news brand in North America, with shows throughout the world and an audience in the hundreds of millions. Under the Fan Fest umbrella, Heroes and Villains Fan Fest is an event for fans of superheroes and villains, and Walker Stalker Con (including the Walking Dead Experience) is for fans of the zombie and horror genres. With exclusive guest appearances at at each event and behind­ the­ scenes access to the stars of The Walking Dead, Once Upon A Time, Arrow, the DC Cinematic Universe and many hero­-based movies at FanFest.com, Fan Fest gives fans a truly one ­of­ a­ kind experience in a Comic-Con-like atmosphere.