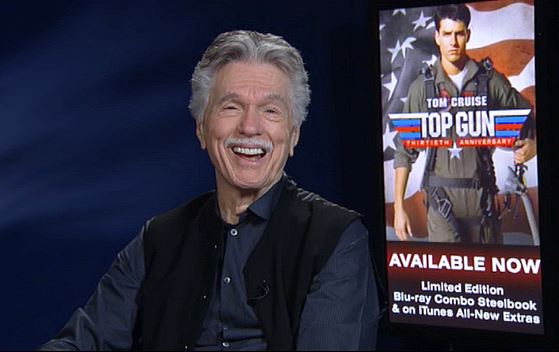 Top Gun Blu Ray – Tom Skerritt gives us a Viper quote from the movie Top Gun, on the 30th anniversary of the film’s release. He also talks hanging garage doors and the famous volleyball scene.

Watch our TV interview with Tom Skerritt. We ask the the actor behind the iconic role of Viper what his thoughts are on: the volleyball scene in the movie, the soundtrack, and what special place does Top Gun hold in his heart. We also get him to recite one of his famous lines from the film, and he tells us if anyone has ever asked him to hang a garage door as a result of the funny scene in the movie Ted! You can grab the Limited Edition Steelbook Top Gun Blu Ray for only $12.99 right now here.

The action-packed thrill-ride that helped define a generation celebrates its 30th anniversary as TOP GUN arrives in a Limited Edition Blu-ray Combo Steelbook on May 3, 2016 from Paramount Home Media Distribution.  The pop culture touchstone will also be available with special features on Digital HD for the first time on May 10, 2016.

The story of an elite group of pilots competing to be the best in their class and earn the title of “Top Gun” captured the imagination of moviegoers upon its release on May 16, 1986, ultimately earning a worldwide box office of over $350 million.  Tom Cruise is superb as the cocky but talented pilot Maverick and Kelly McGillis sizzles as the civilian instructor who teaches him a few things you can’t learn in a classroom.  Featuring a sensational soundtrack with unforgettable songs including Berlin’s “Take My Breath Away” and Kenny Loggins’ “Danger Zone”, the film also stars Val Kilmer, Anthony Edwards and Meg Ryan.

The Blu-ray Combo Pack available for purchase includes a Digital HD Version of the film that can be accessed through UltraViolet™, a way to collect, access and enjoy movies.  With UltraViolet, consumers can add movies to their digital collection in the cloud, and then stream or download them—reliably and securely—to a variety of devices.    The Digital HD Version of the film can also be redeemed through iTunes.

Tom Skerritt, Emmy-winning actor for his starring role in CBS’s PICKET FENCES), is one of the most versatile and acclaimed American actors of both the big and small screens. From his role in Robert Altman’s classic comedy, M*A*S*H, to a roster of films; ..THE TURNING POINT, ALIEN, A RIVER RUNS THROUGH IT, STEEL MAGNOLIAS, TOP GUN, CONTACT, THE OTHER SISTER, TEARS OF THE SUN, his work in an array of television and theatrical film productions continues to be a study in strength and subtlety.

His recent projects continue the diversity:   HBO’s PATH TO WAR, playing General Westmoreland, at the most divisive time in our country’s history, the Vietnam War, reprising the Gary Cooper role in a new version of HIGH NOON for TBS, and in JACQUELIN KENNEDY ONASSIS: A LIFE, as Joseph Kennedy. The Emmy-nominated CBS/Hallmark Hall of Fame movie WHAT THE DEAF MAN HEARD, co-starring Matthew Modine, Judith Ivey and James Earl Jones, broke all viewing records when Hallmark aired it. With DIVIDED BY HATE, for the USA Network, he managed to juggle acting and directing simultaneously when he starred as the leader of a controversial religious cult and helmed it. Skerritt had previously directed several episodes of PICKET FENCES, while also starring as Sheriff Jimmy Bock.

Currently he is developing several original film scripts that he has written or adapted.

Born in Detroit, Skerritt studied at Wayne State University and UCLA.  Interested in directing, a performance in a theater production lead to his being cast in his first film, WAR HUNT (1962), where he met young hopefuls Sydney Pollack and Robert Redford.    Skerritt counts several classics among the more than 35 films he has made. In THE TURNING POINT, he played the understanding husband of Shirley MacLaine and in ALIEN he played the heroic captain of the infiltrated ship. He was Tom Cruise’s commander in TOP GUN, Sally Field’s husband and Julia Roberts’s father AND Shirley MacLaine’s nemesis in STEEL MAGNOLIAS, and the fly-fishing minister father of Brad Pitt and Craig Sheffer in A RIVER RUNS THROUGH IT. Co-starring with Jodie Foster in CONTACT, Skerritt played a less noble character as her ruthlessly ambitious superior.

His roles have run the gamut through comedy, science fiction, westerns and thrillers to psychological dramas, romances and mysteries. On television, Skerritt has starred in literally dozens, including a highly acclaimed six-episode stint on CHEERS as Kirsty Alley’s boss. He also starred in several thrillers, including THE CHINA LAKE MURDERS,  HBO’S THE HEIST, and RED KING, WHITE KNIGHT, with Helen Marin and Max von Sydow.  NBC miniseries HUNT FOR THE UNICORN KILLER, based on the true story of the Ira Einhorn case, MILES TO GO with Jill Clayburgh, POKER ALICE with Elizabeth Taylor, CHILD IN THE NIGHT with Jobeth Williams and GETTING UP AND GOING HOME with Blythe Danner, Julianne Phillips and Roma Downey.

Although heavy work demands leave time to spare, Skerritt teaches screenwriting at the Film School which he co-founded in Seattle with award-winning writer, Stewart Stern (Rebel Without A Cause),  to teach aspiring writers “how to tell a story well”.  The school includes  a speakers series, attracting such filmmakers as Sidney Pollack, Ed Zwick, Ed Solomon and Chris McQuerrie.

The school has given over 700 alumni, ..”a life changing experience.”, inspiring

Skerritt to introduce a similar program, the RED BADGE PROJECT,  to teach Storytelling to PTSD vets at Fort Lewis In Washington state.

Colin Quinn brings “Unconstitutional” to Santa Cruz on May 2nd

On May 25th, 1787, fifty-five delegates in wigs and tights sat down to create a country from scratch. In 2014, comedian and satirist, Colin…