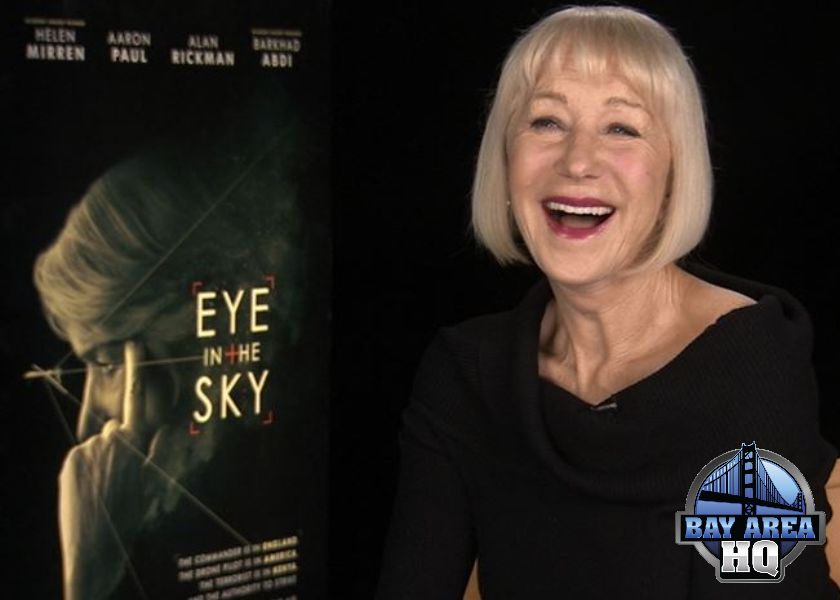 Bay Area HQ’s Ken Spalasso caught up with Dame Helen Mirren to talk about her new film “Eye in the Sky.” Earlier in her career, would she have taken this role, that takes a backseat to an intense, true-to-life drone warfare story? What does she think about the comparisons to the Kubrick film “Dr. Strangelove?” We also see what the Triple Crown (Oscar, Tony, Emmy) winner thinks about Kim Kardashian & Emily Ratajkowski posting topless selfies on social media in support of women who embrace their sexuality. Finally, we ask her what’s her secret to stealing kisses with the best and brightest men in Hollywood.

EYE IN THE SKY stars Helen Mirren as Colonel Katherine Powell, a UK-based military officer in command of a top secret drone operation to capture terrorists in Kenya. Through remote surveillance and on-the-ground intel, Powell discovers the targets are planning a suicide bombing and the mission escalates from “capture” to “kill.” But as American pilot Steve Watts (Aaron Paul) is about to engage, a nine-year old girl enters the kill zone, triggering an international dispute reaching the highest levels of US and British government over the moral, political, and personal implications of modern warfare. Also starring Alan Rickman, Barkhad Abdi, Jeremy Northam, Iain Glen and Phoebe Fox, the film is directed by Gavin Hood (TSOTSI) and written by Guy Hibbert (“Prime Suspect”). Producers are Ged Doherty, Colin Firth and David Lancaster.

Helen Mirren in “Eye in the Sky”

In Gavin Hood’s EYE IN THE SKY, Helen Mirren plays Colonel Katherine Powell, a UK officer spearheading a drone operation in Kenya in the hopes of capturing a British national who has become a terrorist. When new information pushes the operation from capture to kill, Powell’s responsibilities escalate. Not only must she navigate the complex legal and political questions raised by a mission with the very real possibility of collateral damage, but she must direct US pilots based in Nevada to successfully complete the attack. It is a role whose character must project a commanding authority and singleness of purpose. Screenwriter Guy Hibbert had originally written Powell as a man, but Hood convincingly argued that there is both historical precedent for making Powell a woman and the need to address a topic that affects everyone. “I really felt that the film would appeal strongly to both men and women,” explains Hood. “And I didn’t want it to seem like just a war movie for men.” Although Mirren had never played a soldier before, her resume for playing tough, powerful women is extensive. FromPrime Suspect’s DCI Jane Tennison to the title character in The Queen, Mirren has repeatedly played commanding characters ready to do what has to be done, a quality that attracted Hood to her in the first place. “She’s ferocious, determined, highly intelligent and completely grounded,” exclaims Hood. “She has real acting chops and the grit you need to play this character.” To understand Powell’s unique place as a woman in power, Mirren researched the reality of military life today. “I wanted to have an understanding of my character’s trajectory by talking about the kinds of experiences she must have had and the things she would have overcome as a woman in the military,” Mirren explains.