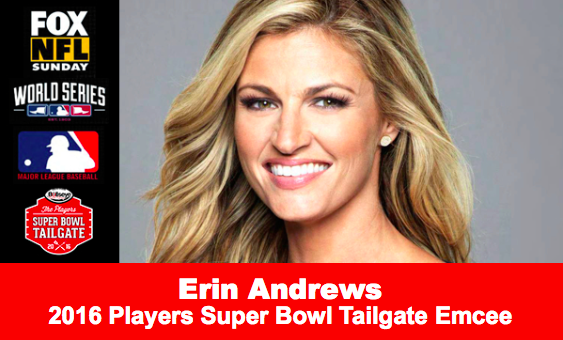 Get ready for the ultimate tailgate experience at Super Bowl 50 in 2016! The Players Super Bowl Tailgate pre-game party opens Super Bowl Sunday, 10:30am-3:30pm, and includes an open premium bar and an all-you can eat 5 star food menu prepared by Celebrity Chef Guy Fieri. Erin Andrews will host the event, and several athletes are expected to attend.

Bullseye Event Group’s exclusive Players Super Bowl Tailgate has earned a reputation as the best Super Bowl pre-game experience, where over 25 active NFL players, celebrities and guests eat, drink and get entertained before the Championship game. Described as a culinary experience in itself, The Players Super Bowl Tailgate features an open premium bar and all-you-can-eat dining with gourmet dishes that for this year’s tailgate will be created by renowned Celebrity Chef Guy Fieri. Aaron May and Beau MacMillan will be assisting Guy in creating an outstanding menu. Guests enjoy a hospitality lounge lined with private tables, where they can watch ESPN’s pre-game coverage broadcast on large lcd televisions.

Guy Fieri, the most recognizable Chef in America (as seen on the Food Network with shows such as Diners, Drive-Ins and Dives, Guy’s Big Bite, Guy Off the Hook, Dinner: Impossible, Guy’s Grocery Games, Rachael vs. Guy: Celebrity Cook-Off, The Next Food Network Star, Ultimate Recipe Showdown, The Best Thing I Ever Ate and Minute to Win It), will be creating an exclusive all-you-can-eat menu for the Players Super Bowl Tailgate attendees. The Host and Emcee

Erin Andrews, host of the Players Super Bowl Tailgate, has solidified herself not only as a leader in sports broadcasting, but also as a nationally recognized television personality whose natural charm and beauty have earned her universal respect and admiration. As a member of FOX Sports “A-Team”, Andrews currently reports as a featured host and sideline correspondent for FOX NFL Sunday, a show that records a staggering 56.4 million unique viewers per season. Additionally, Erin also lends her talents and unique perspective reporting for the MLB All Star Game as well as the World Series.

Over 25 current NFL players will be in attendance interacting with tailgaters at the Players Super Bowl Tailgate. The players will be interviewed by Erin on stage – which is always a fun time – but also signing autographs, taking pictures and talking with fans. There will be a great mix of players at the tailgate ranging from Pro Bowlers to Super Bowl participants.

Aside from gourmet food and a premium bar, the tailgate will feature a first-class space worthy of our signature pre-game Super Bowl party. Bullseye, at the Players Super Bowl Tailgate, will be creating a custom high-end hospitality center filled with private party areas, high top tables and soft leather furniture. The atmosphere will be one of a lush, luxurious lounge made especially for Bullseye’s kind of VIP tailgating. Guests will experience ESPN Game Day Super Bowl pre-game coverage on large jumbo television screens and flat panel screens throughout the pavilion. There will also be a silent auction with unique, authentic NFL memorabilia. 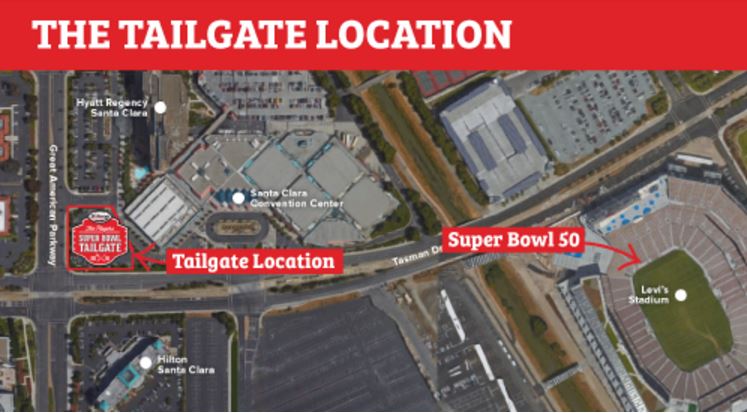