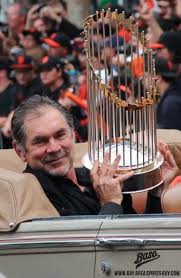 Still on a Giants World Series championship high? Well, the party still isn’t stopping for the three-time World Champs either. The latest San Francisco Giant ready to mix and mingle with fans is none other than the future Hall of Fame manager himself, Bruce Bochy. Bochy’s brilliance has led the Giants to Fall Classic victories in 2010, 2012, and now 2014, truly establishing a golden age in San Francisco baseball. He currently leads active MLB managers with the most wins.

Bochy will be featured in a public autograph signing at ManCave Memorabilia at 957 Industrial Road (Suite C) in San Carlos this Tuesday, November 4th, from 7:00 to 8:30PM. You can purchase autograph tickets to the event now, along with other experiences and items such as photo ops and front-of-the-line passes. Don’t miss out on this very special opportunity to meet one of the Bay Area’s most-beloved modern sports figures.

Aziz Ansari recently wrapped up filming the final season of the beloved NBC comedy Parks and Recreation, but don’t cry too hard: The comedian/actor is…