Natasha Lyonne: Jessica Alba in Orange is the New Black? Watch: The “Intervention” actress on how Jessica Alba would do in Prison, Clea Duvall as Director & more. 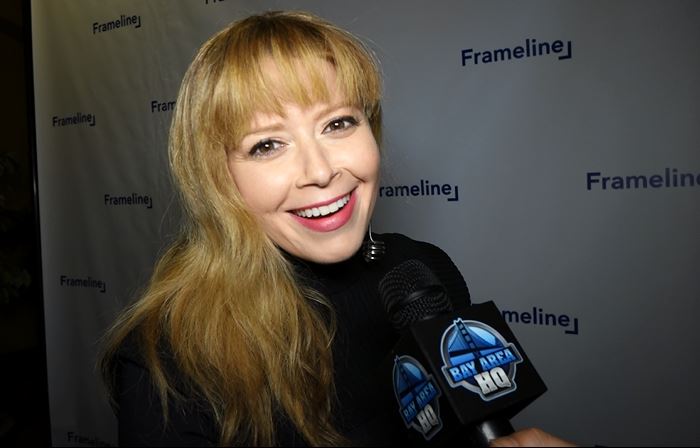 Exclusive: Natasha Lyonne tells us if Jessica Alba could survive on Orange is the New Black. She was in San Francisco for the “Intervention” Showing at the Frameline Film Festival.

Bay Area HQ caught up with Natasha Lyonne, who plays Nicky Nichols in the Netflix series Orange is the New Black, for the San Francisco Premiere of The Intervention, a film written and directed by her BFF Clea DuVall. The two are appearing onscreen together for the first time since the cult-classic But I’m A Cheerleader. Intervention is a heartfelt, yet comedic story of four couples gathering at a lakeside cabin for a “relationship intervention.” The film stars DuVall, Natasha Lyonne, Alia Shawkat, Cobie Smulders, Melanie Lynskey, Jason Ritter, and Ben Schwartz. The film had its world premiere at the 2016 Sundance Film Festival and is scheduled to be released at the end of Summer on VOD by Samuel Goldwyn Films and Paramount Pictures.

From a young age, Natasha Lyonne (Orange is the New Black) has appeared in several dozens of TV shows and films. She has appeared in Pee Wee’s Playhouse, Dennis The Menace, the American Pie series, Everyone Says I Love You, Slums of Beverly Hills, But I’m a Cheerleader, and Blade: Trinity.

Frameline40: The King of Queer Film Festivals, the San Francisco International LGBTQ Film Festival, celebrates its 40th anniversary from June 16-26 with a new look and 11 days of ground-breaking films that reflect the diversity of queer stories from across the globe. Frameline, the world’s longest-running and largest LGBTQ film festival, will showcase lesbian, gay, bisexual, transgender, and queer cinema in San Francisco, Berkeley, and Oakland. Learn more at www.frameline.org.

With an expected attendance of 65,000, Frameline40 will draw film lovers, media artists, and LGBTQ communities to discover 155 stories from more than 24 countries, including Ecuador, Cuba, Philippines, Sweden, Austria, Chile and Netherlands. The 2016 slate proudly comprises 40 percent of films made by women directors (including 50 percent of Documentary Features and 42 percent of Narrative Features), and an expansion to a full week of programming in the East Bay.

Frameline unveils a brand refresh to the Bay Area and the globe. The sleek new logo design, through the phenomenal work of Premier Creative Sponsor Mucho, reflects the tone for Frameline as it forges ahead in a time of evolving media landscapes, larger political and social discussions about identity and expression, and emerging voices and stories still unseen by the mainstream.