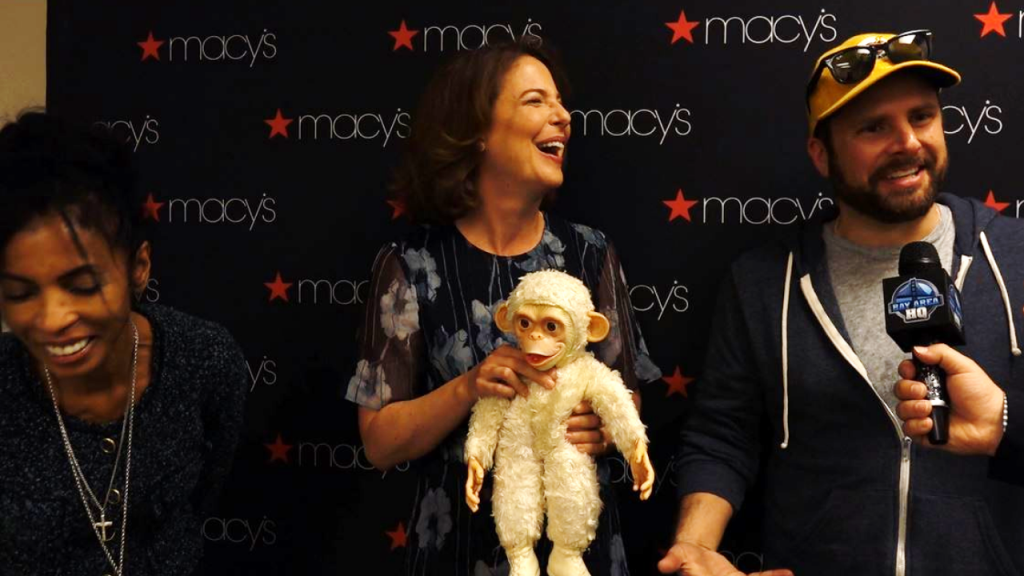 Bay Area HQ caught up with the cast of the new feature film, PUSHING DEAD! James Roday, Khandi Alexander, Robin Weigert and Director Tom Brown visited the Macy’s Mens Department in Union Square to talk to fans in a Q & A session, about how their involvement in the film has influenced and inspired them. Watch the cast have fun talking about Danny Glover, Psych, Snowball the Monkey, Swiss-Ums, and then sharing the message behind this heartwarming dark comedy, premiering at the Frameline Film Festival tonight (tickets to future showings here).

In what may be a comedy first, San Francisco writer-director Tom E. Brown shakes together some unlikely ingredients—healthcare bureaucracy, a gentrifying city, and the tribulations of being a longtime HIV survivor (played by James Roday)—and serves up an effervescent, quirky cocktail of pathos and black humor in his delightful feature debut in Pushing Dead.

Frameline40: The King of Queer Film Festivals, the San Francisco International LGBTQ Film Festival, celebrates its 40th anniversary from June 16-26 with a new look and 11 days of ground-breaking films that reflect the diversity of queer stories from across the globe. Frameline, the world’s longest-running and largest LGBTQ film festival, will showcase lesbian, gay, bisexual, transgender, and queer cinema in San Francisco, Berkeley, and Oakland.

With an expected attendance of 65,000, Frameline40 will draw film lovers, media artists, and LGBTQ communities to discover 155 stories from more than 24 countries, including Ecuador, Cuba, Philippines, Sweden, Austria, Chile and Netherlands. The 2016 slate proudly comprises 40 percent of films made by women directors (including 50 percent of Documentary Features and 42 percent of Narrative Features), and an expansion to a full week of programming in the East Bay.

Frameline unveils a brand refresh to the Bay Area and the globe. The sleek new logo design, through the phenomenal work of Premier Creative Sponsor Mucho, reflects the tone for Frameline as it forges ahead in a time of evolving media landscapes, larger political and social discussions about identity and expression, and emerging voices and stories still unseen by the mainstream.
STRONG THEMES

Frameline’s mission — to change the world through the power of queer cinema — was born out of a political climate that demanded visibility during a time when the LGBTQ community was actively made invisible, is as strong and relevant in today’s contentious social and political climate as it was in the past. As part of a special initiative supported by the Academy of Motion Picture Arts and Sciences, Frameline40 presents In Whose Image? LGBTQ Storytelling 1977-Today, a series of film screenings and panel discussions that reflect upon and contextualize a powerful body of filmmaking from the founding year of our Festival through today. Highly anticipated new films in the social justice category include our Opening Night Film KIKI; Centerpiece Documentary SOUTHWEST OF SALEM: THE STORY OF THE SAN ANTONIO FOUR; THE TRANS LIST; OUT RUN; and TREASURE: FROM TRAGEDY TO TRANS JUSTICE, MAPPING A DETROIT STORY. Retrospective screenings include landmark documentaries from the ‘70s (GAY USA), ‘80s (TONGUES UNTIED), and ‘90s (LIVING WITH PRIDE: RUTH C. ELLIS @ 100 and THE CELLULOID CLOSET), while two panel discussions dive into current topics energizing LGBTQ filmmaking today.

For Frameline40, we look at a beautiful spectrum of teen and youth-driven depictions that go beyond coming-of-age stories or opposition from parents or society. These fully-fleshed depictions of youth allow for complex and nuanced storytelling. Highlights include Opening Night KIKI; Centerpiece World Cinema BEING 17; Showcases RARA and GROWING UP COY; and World Cinema selections CLOSET MONSTER and I PROMISE YOU ANARCHY.

A Flourishing Of New Filmmakers

The Festival prides itself on introducing audiences to remarkable new talent and filmmaking artists, serving as both an incubator for emerging artists and as a platform for fostering dynamic storytelling. For Frameline40, 21 first feature filmmakers are stepping into the spotlight, showcasing their evolving voices and stories. Most of those films will be contenders for Frameline40’s First Feature Award, a $7,500 juried award proudly underwritten by the Wells Fargo Foundation, which will be announced at the Closing Night Party on June 26.

More than two decades after PARIS IS BURNING, filmmakers Sara Jordenö and Twiggy Pucci Garçon’s vibrant documentary fast-forwards to the ballroom scene of today: an unapologetically flamboyant and political subculture centered on LGBTQ youth of color, for whom dance is far more than performance.

Tomboy Joey and married mom Rayna fall for each other in this star-crossed love story set in working class Pennsylvania. The pair can’t quit each other, but struggle to imagine a life together as Joey’s deployment for Afghanistan approaches.

When Thomas, the adopted son of rural mountain farmers, has to temporarily share a home with the more urbane Damien, the two hostile boys are forced to negotiate the challenges of unspoken desire, in director André Téchiné’s alluring new masterwork.

At the tail end of the “Satanic ritual abuse panic” of the 1990s, four Latina lesbian women were accused and wrongfully convicted of a heinous sexual assault. After serving over a decade in prison, the women won’t stop fighting to prove their innocence, in this heart-wrenching examination of the criminal justice system.

Rendered in the same radically real style that made the HBO series a watershed in the presentation of ordinary gay lives, LOOKING, the movie, reunites the show’s sexy San Franciscans in a romantic drama that delivers the sweet satisfaction of closure.

In this delectably twisted fairytale of gender fluidity, three outcast girls’ dreams of boyhood become reality, sending them down a shadowy path of self-discovery.

In a highly conservative Colorado town, a pink-loving, pig-tailed six-year-old girl named Coy becomes the unlikely poster child for transgender rights, in a landmark case that is reverberating in state courts across the country.

Friends and family stage a marriage intervention for a toxic couple, only to have to confront their own issues in writer-director-star Clea DuVall’s sharp, funny, and honest portrayal of the complexities of modern adult relationships.

The thrilling, sexy contours of a new relationship have rarely been mapped as well as in this bold romance, which unfolds in real time on the streets of Paris. After a sweaty bout in a sex club, Theo (Geoffrey Couët) and Hugo (François Nambot) take off together on their bicycles, engaging in a beautifully crafted and moving dialogue that traverses an extraordinary range of personal and psychological territory.

In this quirky dark comedy set in San Francisco, a bureaucratic snafu keeps an HIV-positive writer from getting his prescriptions. Skewering healthcare bureaucracy, a gentrifying city, and the tribulations of being a longtime HIV survivor, the film features a terrific ensemble cast, including James Roday, Robin Weigert, Danny Glover, and Khandi Alexander.

With her first feature, writer-director Pepa San Martín constructs a brilliantly subtle family drama that is both a poignant coming-of-age tale and a based-on-a-true-story account of a lesbian marriage threatened by social forces, told chiefly from almost-13-year-old daughter Sarah’s perspective.

The LA air is thick with sublimated desire and frustrated yearning in Andrew Ahn’s deeply felt feature debut, a touching study of a virginal, closeted teenager wrestling with his Korean-born parents’ expectations and the forbidden, mysterious allure of men’s bodies.

In 1990, seven male dancers joined Madonna on her taboo-busting Blond Ambition tour-which blew the roof off of global pop culture, raised AIDS awareness, and turned the dancers into sudden celebrities. This empathetic yet probing portrait revisits that era and traces the dancers’ paths from youthful exuberance to complicated adulthood.

This 1970s-set, French love story provokes a rush of nostalgia (even if you weren’t there) for that heady time when political and romantic passions intertwined. French farm girl Delphine finds love with Parisian feminist Carole, but family keeps pulling her back into the closet in this smart, sexy movie.

Boasting an impressive assemblage of transgender luminaries-including Buck Angel, Laverne Cox, and Shane Ortega-this riveting documentary highlights the distinct individuality and diverse outlooks of its subjects, while simultaneously evoking the collective power of an indomitable community.

Established in 1986, the Frameline Award is given every year to a person or entity that has made a major contribution to LGBTQ representation in film, television, or the media arts. The 2016 Frameline Award will honor Robert Hawk, whose extensive influence on American independent cinema has fostered and brought to the screen innumerable queer voices and stories. Frameline will also present the Bay Area premiere of directors JJ Garvine and Tai Parquet’s documentary FILM HAWK.

Curator. Consultant. Mentor. Producer. Independent film guru. Robert “Bob” Hawk is all that, and much more. For forty years, he has discovered and championed new film talent-including Ira Sachs, Barbara Hammer, Kimberly Reed, Rob Epstein, Kevin Smith, Edward Burns, and many others-who share their love for the great impresario as he celebrates his 78th birthday.

Since 1990, Frameline has awarded more than $460,000 in completion funding to 136 film projects by and about the LGBTQ community. Frameline40 presents six films that were finished with assistance from the Completion Fund:

This much-anticipated sexy new media series openly grapples with the frictions and fissures of desire between trans and queer women, as they navigate sometimes-paradoxical identities in Los Angeles.

Jheri Jones is the 74-year-old transgender matriarch of a unique Mississippi Bible Belt family. After years of estrangement, she lives with two of her four grown sons in her tidy trailer park home, where challenges abound but love conquers all.

Documentarians Chiang and Symons follow the only LGBT political party in the world-the Ladlad Party-and turn an incisive lens on the Philippines’ fascinating political world, where beauty salons become campaign chapters and dubious party alliances are the norm.

In tribute to Frameline’s 40th anniversary, this program revisits a remarkable year in gay and lesbian visibility, including a film from the first festival and the rarely screened GAY USA, Arthur Bressan’s groundbreaking documentary on the burgeoning gay rights movement of 1977.

Gender-bending astronauts, an evil Empress, and an adventure that will take you to the farthest, most fabulous reaches of the galaxy. It can only be the international cult classic-and significant slice of San Francisco drag history-VEGAS IN SPACE!

About Frameline40: San Francisco International LGBTQ Film Festival
Frameline40 runs June 16-26, 2016 in San Francisco, Berkeley and Oakland. Commemorate legendary filmmakers, discover emerging talents, and join the distinguished community of festivalgoers at the world’s premier LGBTQ film festival and the largest celebration of queer cinema. Festival tickets go on sale to members on Friday, May 27, and to the general public on Friday, June 3. www.frameline.org/festival

Frameline’s mission is to change the world through the power of queer cinema. As a media arts nonprofit, Frameline’s programs connect filmmakers and audiences in San Francisco and around the world. Frameline’s integrated programs provide critical funding for emerging LGBTQ filmmakers, reach hundreds of thousands with a collection of more than 250 films distributed nationally, inspire thousands of students through Youth In Motion, which sends free films and curricula to schools across the nation, and creates an international stage for the world’s best queer film through the San Francisco International LGBTQ Film Festival and additional year-round screenings and cinematic events. Learn more at www.frameline.org.