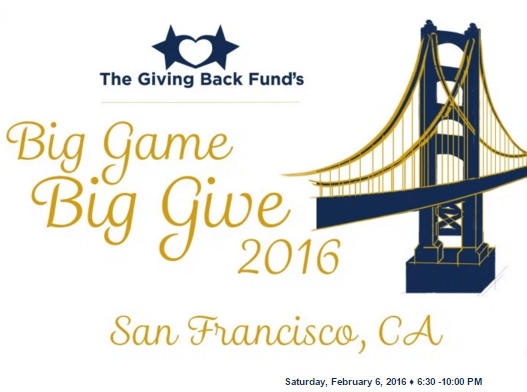 Joe Montana to Host Big Game Big Give Super Bowl 50 Party – This year, during historic Super Bowl 50, The Giving Back Fund will host influential guests from all over the world at an exquisite private estate in Atherton, CA. The event will showcase the host state of California by reimagining its most iconic landmarks, and pairing them with the food and wine that sets California apart. California’s culinary talent, led by Chef Roland Passot of La Folie, Left Bank and LB Steak, has teamed up with six other Bay Area Top Chefs to create extraordinary stations that will undoubtedly elevate this event above the rest on Super Bowl weekend. The event is set for Saturday, February 6, 2016 ♦ 6:30 -10:00 PM.

2016 Celebrity Co-Hosts are former SF Giants All-Star Matt Williams and former SF 49er Super Bowl hero Joe Montana with Lt. Gov. Gavin Newsom as Honorary Co-Chair. There will be a special musical performance and many other surprises including a silent and live auction that are not to be missed; but most importantly, this is an opportunity to show the world just how philanthropic the Bay Area truly is. In that spirit, the event is planning to honor the Giving Pledgers this year – founded by Bill Gates and Warren Buffett who have pledged to donate at least half of their net worth to charity in their lifetime.

Each year, The Giving Back Fund holds its “Big Game Big Give” fundraising event at a private estate in the Super Bowl city the weekend of the big game. This star-studded gala has become a favorite among the philanthropy elite, with previous celebrity hosts including Alec Baldwin, Michael Bay, Mark Wahlberg, Hilary Swank, Ashton Kutcher and Demi Moore. The 2010 Big Game Big Give, hosted by Michael Bay in his Miami home, was selected as the #1 party of Super Bowl XLIV by ESPN, The Magazine. The 2015 event, held in the Phoenix home of former MLB superstar Matt Williams and his lovely wife, Erika, raised over $1,000,000, a record for a Super Bowl charity event.

Big Game Big Give is an exclusive invitation-only cocktail party for 500 celebrities, athletes, business entrepreneurs, philanthropists and other VIPs. To keep the event enjoyable for our guests, a limited number of people are invited to purchase tickets by GBF, or on the recommendation of the event’s prestigious local Host Committee. Guests enjoy cocktails and appetizers while mingling in a relaxed, luxurious and intimate environment. Typically a well-known musical artist will perform 3-4 songs and a live auction will take place. The host estate is also set with silent auction items, bars, appetizer stations and unique displays and experiences.

The Concord Pavilion will be on their foot moving on Saturday night when legendary Grammy® Award winner, Barry Gibb makes a rare Bay Area Tour…