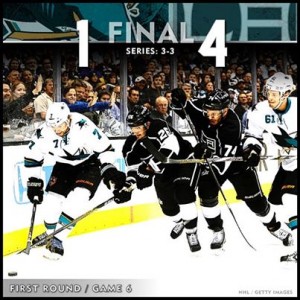 Tickets are now on sale for a crucial Game 7 at the Shark Tank in San Jose on Wednesday, April 30th. San Jose could not close out the series last night, and lost to the LA Kings, 4-1.
With the score tied at 1 in the middle of the third period, Kings defenseman Robyn Regehr flung a shot into the net that managed to get through to Sharks goalie Alex Stalock. Stalock made the stop, but lost the puck momentarily in his pads. Kings right wing Justin Williams jabbed at it, and Sharks player Matt Irwin’s swipe bumped the puck across the goal line for a Kings 2-1 lead with 8:04 left. The Kings scored two more goals to seal the deal in Game 6, beating the Sharks by three. The winner of Game 7 will face the Anaheim Ducks in the conference semifinals.