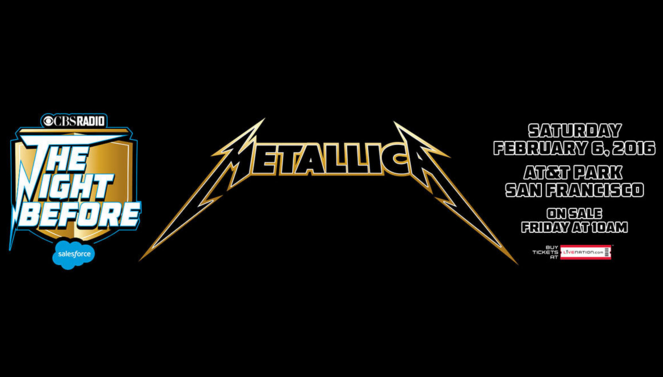 Metallica Headlines “The Night Before” Super Bowl 50 Party at AT&T Park – Longtime Bay Area residents &  one of the biggest selling acts in American history, Metallica are set to headline the third installment of CBS Radio’s “The Night Before” annual Super Bowl Concert. The band announced “we are excited and honored to be invited to participate in one of the biggest annual traditions and celebrations in America, the Super Bowl!” The festivities start at 5pm, the night before the big game on February 6, 2016 at AT&T Park in San Francisco. Last year, Jason Aldean, Dierks Bentley and Florida Georgia Line headlined the show in Arizona. 40,000 fans are expected to celebrate at the stadium.

Metallica previously opened for the Rolling Stones but this will be the first time they have ever played a headlining show at the current home of the San Francisco Giants. For the general public, tickets go on sale this Friday, November 6th at 10:00 AM PST on www.ticketmaster.com. Fan Club members should log in to metallica.com for details about their pre-sale beginning on Tuesday, November 3 at 10:00 AM PST. For Citi Cardholders, a presale begins tomorrow. Details here.

To keep track of all the Super Bowl 50 Parties and events, make sure you visit Super Sunday HQ and get the mobile app, where you can scroll through all the star-studded parties, add Super Bowl events to your calendar, and connect with other Super Bowl 50 partygoers and VIP’s. Follow the links to get the #1 Insider’s Guide to the Super Bowl: