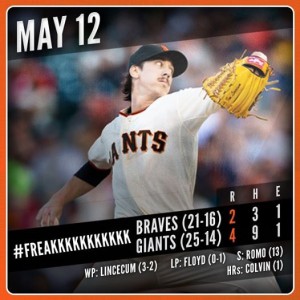 Tim Lincecum didn’t allow a hit against the Atlanta Braves for 4 1/3 innings and left the game only allowing one run on two hits while striking out 11 over 7 2/3 innings.
Left Fielder Tyler Colvin, was just called up recently from Triple-A Fresno and scored the Giants’ first run of the game with a solo home run into McCovey Cove in the second inning.
The splash hit was Colvin’s first hit as a member of the Giants and came in his first home at-bat. Colvin finished 2-3, with 3 RBI’s after he drove in two, on a two-run triple.