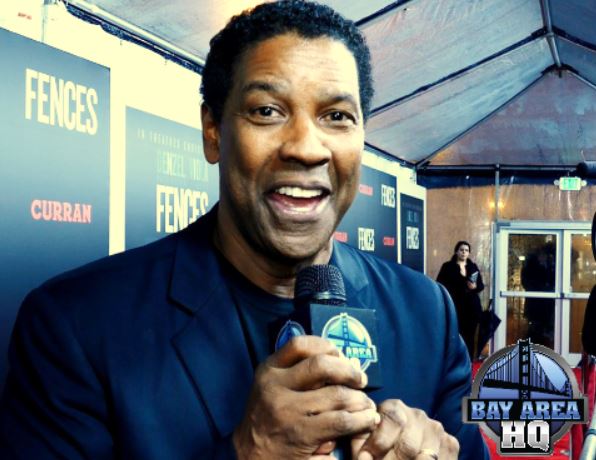 Did Denzel Washington just challenge us to a high stakes game of basketball? Watch the two-time Academy Award winner in good spirits on the red carpet for the San Francisco screening and Q & A session for FENCES (opening on Christmas Day in the Bay Area). The celebration kicked off the re-opening of the Curran Theater. Inside, the newly remodeled venue was a multi-level masterpiece, crafted with amazing detail. Be sure to catch one of the first three productions at the new Curran — FUN HOME, ECLIPSED and ENCOUNTER

The original stage play of Fences, produced by Carole Shorenstein Hays and starring James Earl Jones and Mary Alice, premiered at the Curran theater on February 6, 1987 and opened on Broadway that spring.  It went on to win the Tony Award for Best Play, as well as the Pulitzer Prize.  The Tony Award was again given to Fences for the Broadway revival, which opened in the spring of 2010, produced by Carole Shorenstein Hays and Scott Rudin, and starring Denzel Washington and Viola Davis (who both won Tony Awards for their roles as Leading Actor and Actress).

Bachelorette Andi Dorfman’s Advice to Men: MUST WATCH! We recently learned that not one guy approached the gorgeous TV personality at Super Bowl 50 Parties….