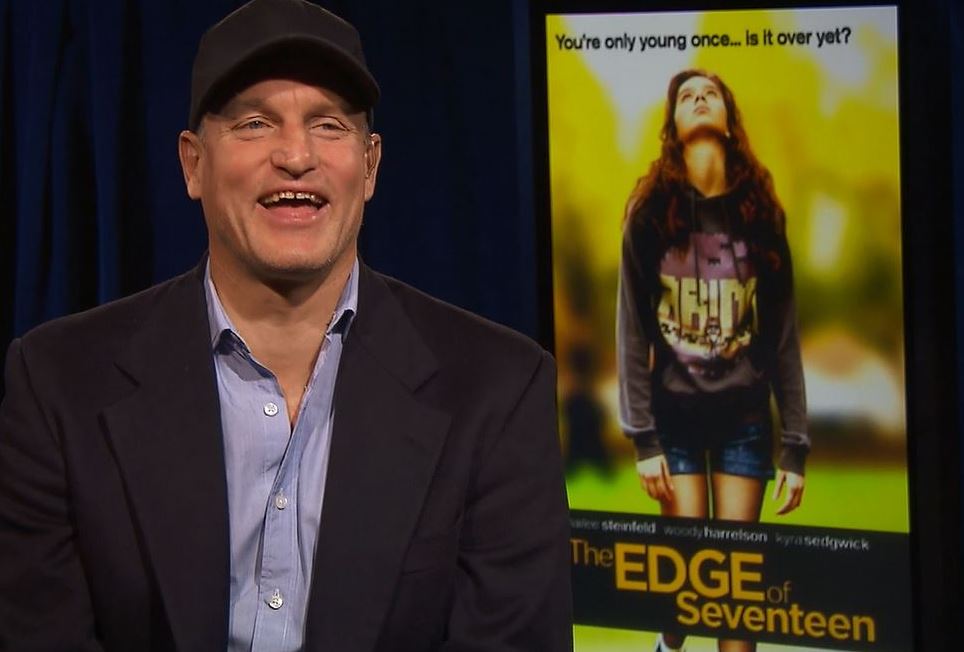 Watch our interview with Woody Harrelson, who delivers another great performance with Hailee Steinfeld in the amazingly authentic and original coming-of-age movie, The Edge of Seventeen, coming to theatres this weekend, November 18th. In his interview with Anna Cadena (@annakcadena on IG), Woody talked about his high school experience, giving Hailee raw vegan cookies, and his reflections on his infamous climbing of the Golden Gate Bridge to save hundreds upon hundreds of redwood trees, 20 years ago, in November of 1996. Watch the interview above to hear Woody apologize for holding up traffic in one of his favorite cities.

About The Edge of Seventeen

Hailee Steinfeld and Woody Harrelson star in this hilarious, edgy and poignant coming-of-age tale about an endearingly witty but self-absorbed teen whose life goes into a tailspin after her older brother starts dating her best friend.

Academy Award nominees Hailee Steinfeld (True Grit) and Woody Harrelson star in this hilarious, poignant coming-of-age tale about a witty but self-absorbed teen whose life goes into a tailspin after her older brother starts dating her best friend.

Not many people pay attention to socially awkward high-school junior Nadine (Steinfeld), but it isn’t for lack of effort on her part. The Edge of Seventeen begins with Nadine assailing her history teacher, Mr. Bruner (Harrelson), with her umpteenth breathless — and phony — crisis. Tired of Nadine’s high drama, Mr. Bruner refuses to offer token consolation, though he does offer her half his cookie.

Whatever adolescent disaster Nadine thinks she’s suffering from, nothing can prepare her for what is tantamount to a personal apocalypse: Nadine’s best — and, well, only — friend, Krista (Haley Lu Richardson), has started dating Nadine’s annoyingly earnest fitness-nut older brother Darian (Blake Jenner). Ugh! This unholy union sparks a new level of mania in Nadine, one that will push her to try new things — like sending brazen text messages to the cute, aloof boy who works at the pet store in the mall.

Writer-director Kelly Fremon Craig’s debut is a rollicking tour of 21st-century teen angst. Nadine can be crazily solipsistic, but over the course of her misadventures she learns to exercise empathy for others, even Darian. Harrelson (also starring in the Gala Presentation LBJ) gives a beautifully considered performance peppered with small surprises, while Steinfeld exudes comic chops, embracing every facet of this wondrously complicated heroine — and taking her to the very edge.

Dakota Fanning Knit Ewan McGregor A Scarf! We Talk to the Stars and Director of American Pastoral, based on the Pulitzer Prize-winning novel by…