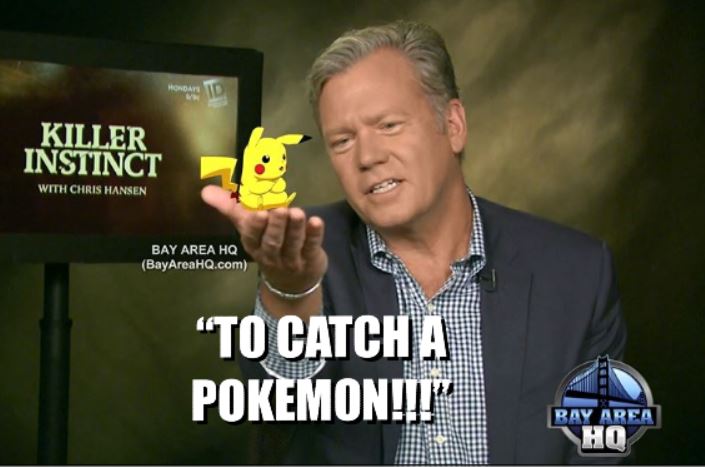 Bay Area HQ caught up with multi-Emmy award winning investigative journalist Chris Hansen, who is adding his own style of questioning to Season Two of “Killer Instinct.” You can watch full episodes online right now at Investigation Discovery. We asked Chris Hansen about the show, Pokemon Go in New York City, his love for Michigan State and more!

Emmy Award-winning journalist Chris Hansen has built a career around investigating and reporting crime. While he has seen it all in his three decades on the job, nothing could prepare Hansen for what he learned when he went on the road looking into America’s most horrific crimes. With the increased number of homicides in the first few months of 2016, KILLER INSTINCT WITH CHRIS HANSEN returns to Investigation Discovery (ID) to understand why. The second season follows Hansen as he investigates every aspect of the motives and emotions behind some of the nation’s most shocking murders. With no holds barred, rare access and intimate interviews to those closest to the case, the all new season of KILLER INSTINCT WITH CHRIS HANSEN is available to watch online and on Mondays at 9/8c, only on ID.

In the premiere episode, Hansen chronicles every step of the puzzling disappearance of a young Ventura County, Ca. woman, Megan Barroso.  After attending a Fourth of July party with friends in 2001, Barroso’s car was found empty and lined with AK-47 bullet holes. With no drug addiction, no gang affiliation, and no flashy tendencies, law enforcement struggles to determine where Barroso is—and just what happened to her. Through in-depth interviews with various experts and Barroso’s own family members, Hansen paints the picture of an innocent woman whose life tragically intersected with a sociopath in this astonishing case.

In Tampa, Fl., mild-mannered Anthony Lee was known for his acid-tongued alter-ego, “South Beach Wanda”, a drag queen who performed at nightclubs all over town. The day after Memorial Day, Lee is relaxing at the home of his with his friend, Tiffany, when an intruder bursts in. Tiffany hides in the bathroom and dials 911 when she hears shots fired. But what was the killer after? To find the true motive for Lee’s murder, Hansen gets to the bottom of an incredible tale of misdirection and betrayal.

Jean Schwarzkopf enjoys the good life in Gulf Harbors, Fl.—a retirement community filled with good friends and younger men. The happy serenity of this town makes for a baffling backdrop for her murder, when Schwarzkopf is found beaten to death wrapped in duct tape. Because of her active social life, police have no lack of suspects—but local detectives are astonished when the case points them in the direction of the Chicago mafia. Hansen unwinds a tale too twisted to believe, revealing how Schwarzkopf’s killer is eventually brought down.

A Kid to Kill For

In the largely Hispanic community of Planada, Ca, Luis Ceja appears shocked when his wife, Ana, drives off with their three-month-old son and never comes home. Later, when a burning corpse is reported in a nearby orchard, everyone in the community fears that it’s her. If so, what’s happened to her baby? And why isn’t her husband more upset about it all? Hansen explores a case with perhaps the most unlikely motive of all—revealing a deadly conspiracy.

Shots in the Heartland

When the parents of newly affianced 47-year-old Mike Sisco and 53-year-old Karen Harkness arrive at their condo in Topeka, Ks., they’re shocked and horrified to find the couple gunned down in their own bed. It’s unusual to have such a violent crime in this well-heeled community. To add to the confusion, nothing seems to have been taken from the home. As it wasn’t the first marriage for either, investigators start to focus on the victims’ extended and former families—but what Hansen discovers is that sometimes the impossible becomes a dark reality.

Chris Hansen is no stranger to crime investigation. His reports have stirred interest in both national and international issues, but his award-winning, breakthrough investigative reporting involving online sexual predators for Dateline NBC exposed hundreds of men who targeted young teenagers over the Internet. KILLER INSTINCT harnesses Hansen’s passion for uncovering the truth in the hope of shedding new light on heartbreaking homicide cases. Through extraordinary access to key witnesses, loved ones, and law enforcement officials, Hansen uses his signature skill for coaxing subjects to open up and guide viewers through every twist and turn of a captivating, unfolding criminal drama. After deconstructing the case, KILLER INSTINCT follows Hansen as he pieces the jigsaw puzzle back together again with added insight drawn from visiting the scene of the crime, interviewing key players, and uncovering never-before-seen archived material.

Chris Hansen is the creator of Dateline NBC’s “To Catch A Predator.” An 8-time Emmy award-winning investigative journalist, Chris also hosts Discovery (ID) series “Killer Instinct with Chris Hansen.” Chris Hansen has covered many breaking news stories for the last 20 years and has used hidden cameras to investigate everything from child sex trafficking to terrorist groups, to counterfeit drugs being smuggled into the United States. Hansen has also received awards for excellence in journalism from both the Associated Press and United Press International, and he has won four Edward R. Murrow awards for his news series investigating aviation security, and safety as well as his coverage of the Ford/Firestone case. He’s been honored with three Clarion awards for his coverage of Indian child slave labor, aviation security and the Uni-bomber case and a first place medal for an undercover investigation of airport security as well as numerous Headliner awards.

Lionel Richie on the San Francisco Bay Area, Michael Jackson, We Are The World