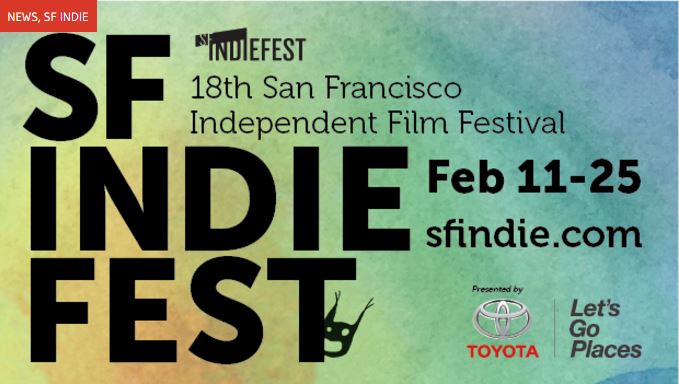 SF Indie Fest, The San Francisco Independent Film Festival, recently announced the entire lineup for the 18th edition of the festival, which will return to San Francisco Thursday, February 11th to Thursday, February 25th. During the two-week event, the festival will bring some of the finest independent films and digital programs from around the world to San Francisco audiences. As in year’s past, films will be screened at the Roxie Theater and Brava Theater, but SF IndieFest is thrilled to also be screening at the new Alamo Drafthouse New Mission Theater location. For its 18th year, SF IndieFest is partnering with Noise Pop to co-present a sidebar series of music documentaries on February 19-21 at the Roxie Theater, curated by SF DocFest programmer and filmmaker Chris Metzler (Everyday Sunshine: The Story of Fishbone, and Plagues and Pleasures of the Salton Sea).

Additionally, the festival will have a Fantastic Films sidebar curated by Bears Fonte (Former Director of Programming at the Austin Film Festival, and the Founder/Director of the Other Worlds Sci-Fi Festival), which will take place at the new Alamo Drafthouse New Mission Theater. Some of the most unique and compelling new indie films will screen over the course of the festival and San Francisco audiences will have the opportunity to meet some filmmakers while sampling these outstanding comedies, horror flicks, love stories, documentaries and short films. For more information, please visit www.sfindie.com or call

New Partnership with Presenting Sponsor Toyota
SF Indiefest and Presenting Sponsor Toyota are partnering to present a series of 5 short films at the festival called The Toyota Effect, highlighting how Toyota collaborates with other companies and non-profit organizations to help create a positive impact on people, society, and the environment. The short film series by Academy-and Award-Winning filmmakers Ross Kauffman, Kief Davidson and Steve James showcases how Toyota shares its Toyota Production System with different partners to help them find better ways of doing things. By working with Toyota to make small changes to their day-to-day operations, the partners are able to have a greater impact – and, in many cases, help more people in need.

Super Bowl: Men in Tights Pre-Fest Kick Off
Before the festival kicks off in earnest, join SF IndieFest at the Roxie on Super Bowl Sunday, February 7th for the annual SUPER BOWL: MEN IN TIGHTS football/comedy show. Laugh and cheer in the presence of David Cairns and other local comics!

Opening Night Film
On Thursday, February 11th at 7pm the Brava Theater in San Francisco, SF IndieFest will open with FRANK AND CINDY, director G.J. Echternkamp’s personal retelling of his late teen years and his relationship with his mother, Cindy (Rene Russo), and his step-father, Frank (Oliver Platt).  Frank, during his stint as a member of the ‘80s one hit wonder band, OXO, met Cindy as a devoted groupie. Reality sets in for Cindy when she realizes that her marriage doesn’t match up with her fantasies of a life filled with glamour and award shows.

Following the screening, SF IndieFest will host the Opening Night Party at Dance Mission (3316 24th Street at Mission Street) with special guest DJ Shindog spinning one hit wonder 80’s/90’s Dance hits. Attendees are invited to join festivalgoer’s, filmmakers, SF IndieFest staff and other special guests in kicking off the festival on the right note with a hosted bar and special surprises.

Closing Night Film
Presented in 35mm, TOO LATE will close the 18th SF IndieFest on Thursday, February 25th at 9:15pm at the Roxie Theater. The film follows a private investigator (John Hawkes) as he finds himself tangled up in a sleazy scandal involving strip clubs, petty drug pushers and missing girls. Dennis Hauk’s debut feature plays out in five, twenty-two minute shots, the maximum allowed on Techniscope 35mm.

Following the film, festival attendees are invited to join the SF IndieFest staff, volunteers and filmmakers at the Wrap Party at the Brand New Vortex Room (3189 Mission Street at Valencia Street).

Music In Film Spotlight
For its 18th installment, the festival is excited to collaborate with Noise Pop and showcase films that focus on music, including:

Genre Films at the Alamo Drafthouse
IndieFest will also present Fantastic and Far Out Flicks curated by Austin’s Other Worlds programmer, Bears Fonté, such as:

International Films Showcased
This years festival is pleased to present a collection of films that tell stories from across the globe, both fiction and non-fiction. The festival will showcase the following:

Additionally, as part of the partnership, KQED will be hosting a free, open bar reception/party at the triumphant return of the Bad Art Gallery on Friday, February 12th at 518 Valencia.

Party Time!
What’s IndieFest Without Some Parties!
In keeping with years past, SF IndieFest will present the following additional parties providing San Francisco with some of the most unique and exciting experiences for audiences to enjoy during the festival.

General Information about SF IndieFest
Regular film tickets are $12 in advance, $13 at the door. The Opening Night Film+Party is $22 in advance, $25 at the door. Super Bowl: Men in Tights is $10 in advance, $12 at the door. The Power Ballad Sing A Long is $15. The Big Lebowski Party is $20. The IndiePass, good for all screenings and parties at the Film Festival, is $200. Passholders jump to the front of the line at all screenings! 5Film vouchers are $55, 10Film vouchers are $100. These discount vouchers are only available and onlyredeemable at sfindie.com. Vouchers are redeemable for all events except Opening Night, Big Lebowski and the Power Ballad show. Full festival information, complete with additional ticket information, trailers and more details can be found at sfindie.com.